Sometimes random events influence your life in ways that you can never anticipate. One such event happened to me back in 2006.

As anyone who has followed the fortunes of Llamasoft over the years will know, I have a certain affinity with bovines. My coding handle for years was “Yak”. I’ve always identified somewhat with oxen – udeful animals, not necessarily the sharpest tool in the box but possessing the patience and strength to get the job done – traits that I find admirable, and that I can usefully hope to emulate in my own work. Completing a project taking a year or more takes a certain amount of determined plodding, bovine stoicness. Oxen are gentle, patient, and get the job done. And often they have lovely horns.

One day back in 2006 when Giles was away I was sat here on my own and I was thinking about how oxen, although doubtlessly useful throughout human history, are seldom much celebrated. They are not a glamorous animal, the bovine equivalent of a tractor. Often taken for granted. Did anyone ever, I wondered, think of an ox as something lovely? Something beautiful, to be admired? Something precious?
So as you do, I did an idle Google search, for “precious ox”.

Following the resulting links I found myself reading an academic paper entitled “The Amazonian Ox Dance Festival: An Anthropological Account”. It told of a place in northern Brazil, in Amazonia, where there takes place a festival, virtually unknown outside of Brazil: “The festival is a peculiar development of a folk play that has existed in Brazil since the 19th century and is based on the motif of the death and resurrection of a precious ox.”

(You can read the academic paper here, and I thoroughly recommend it; it’s a fascinating read).

I read on into the night, fascinated. The festival takes place on the island of Tupinambarana, a day’s passage by boat down river of the capital of Amazonas, Manaus. It is a celebration of the cultural blending of the people of the region and comprises aspects of Amazonian tribal mythology, Catholicism and African mythos brought to the region by the slave trade. It takes place in the city of Parintins, a town only reachable by river or by a small airfield, and once a year at the end of June two teams compete in a three-day competition of dance, music and astonishing artistry and creativity. The entire town is divided into areas of red and blue, the colours of the two teams named for the underlying bovine theme of the competition – “Boi Caprichoso”, the Capricious Ox, whose avatar is a black ox with a star on his forehead; and “Boi Garantido”, the Reliable Ox, a white ox with a red heart on his forehead.

Parintins lies just below the equator, 24 hours downriver from Manaus.

The “Brincadeiro do Boi”, or ox-play, the tale of the death and resurrection of a precious ox, is something that has taken place in various parts of Brazil for hundreds of years. But only in Parintins has it become the huge festival that it is now, and the performances have expanded to include material celebrating the Amazonian environment and “cabloco” culture of the local people, and blends Amazonian, European and African religion and mythos in an incredible display of artistry. Underpinning it all is the central theme of the tale of the ox, and in the performance the arrival of the ox – Caprichoso or Garantido – draws the wildest cheers from the fans.

Boi Caprichoso dances. Behind you can see members of the Marujada da Guerra, Caprichoso's percussion group.

Everything in the town is divided into red and blue. It is one of the few places in the world where you will see a blue Coca-Cola logo – no supporter of Caprichoso, whose colours are black and blue, would be keen to drink Coke from a red can, so the company produce blue cans for the Caprichoso supporters. Images of the two rival oxen are everywhere. Even the phone boxes are shaped like oxen. Everybody loves their chosen ox – Caprichoso or Garantido – with a passion.

Even Coca-Cola comes in red and blue colours in Parintins.

Even the phone booths in Parintins are shaped like oxen.

All this sounded amazing, and I jumped on the then-nascent Youtube to see if I could find anything relating to this amazing-sounding bovine festival. Back then there wasn’t a lot to be found, but I did find this one clip that blew me away:

It starts out simply enough, you see the black ox dancing, and then as the clip progresses you begin to see the scale of the thing: the ox is dancing on the palm of a giant animated statue, and that statue is itself dwarfed by the scale of the massive arena in which the performance is taking place.

The arena, like the town itself, is divided in red and blue. A giant Boi Caprichoso hovers over the arena.

I remember seeing that clip and thinking then and there, holy cow, one day I have to go there, see that. Being at that point years from the end of my mortgage and God help me trying to make video games at that time that seemed like a far distant “one day, maybe” though.

In the years that followed we continued to learn about the Parintins festival. I ordered a copy of Caprichoso’s CD of songs for 2006, and that stayed in the CD player of our Toyota for many months (in the process allowing us to learn a peculiarly ox-specific subset of the Brazilian Portuguese language). Eventually all the songs became available on Boi Caprichoso’s web site, so I’d go there to hear each new year’s music. Youtube eventually began to host more videos of the Festival, and these days each night’s performances are generally available to view by the following day. You can even watch the performances live if you hook up to the stream from TVAcritica.

Now I’m getting to the sort of age where you start to realise that perhaps you ought to get round to doing some of the things you’ve always wanted to do, while you still can; and mercifully my mortgage is but a distant memory. So tomorrow morning we will be outside to catch the bus to Carmarthen, the first, mundane step on a journey that will culminate in our arrival in the Bumbodromo, the huge arena that I first saw in that old Youtube clip. We’ll be travelling to Parintins via a 24-hour boat journey from Manaus, the capital of Amazonia, and we’ll be sleeping on the boat for the duration of the Festival. As Caprichoso supporters we’ll be sitting on the blue side of the Bumbodromo. This year’s performances should be especially good – Caprichoso having won the previous two years’ competitions are out to take a rare consecutive third win, while Garantido will be doing their best to break Caprichoso’s streak. Both teams will be pulling out all the stops to outdo one another in the arena. 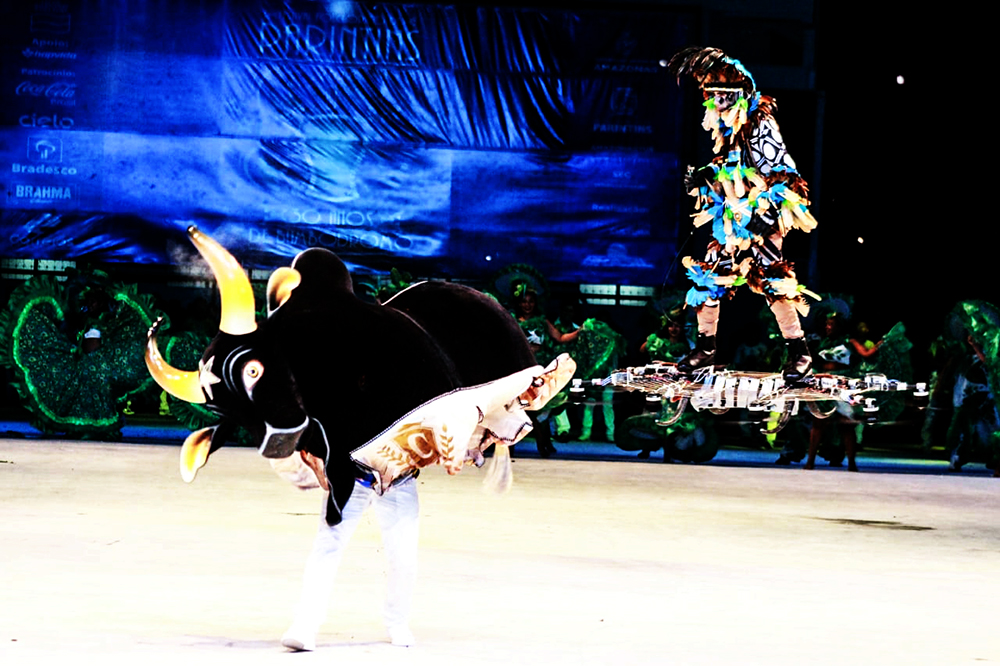 The tribal shaman flies in on an actual working hoverboard to resurrect the precious ox Caprichoso.

I still find it weird to think that after all these years I’ll finally get to see Parintins with my own eyes, to sit in the arena watching the ox dance, surrounded by people singing of their love for the ox, the “touro amado”, the beloved bull. That old idle Google search will have led me to the one place on earth where oxen are celebrated with such joy.

Expect more posts when I get back. I’ll have lots of pictures.