I’ve just finished our new iOS game “GoatUp”.  It is now available on the App Store

It’s a bit of a departure for me because one genre that Llamasoft has never attempted has been platform games.  This is the first platform game we’ve ever done.

In fact I’ve often said that I “hate platform games”.  This isn’t exactly true, but it does reflect my disaffection with the glut of platformers which swamped the 16-bit consoles post-SMB, and the fact that I was never a keen Manic Miner player.  (I do have a great fondness for Manic Miner, and I appreciate the skill and humour that went into making it, and I like how for a generation of Speccy kids Miner Willy was basically our British Mario.  Just that the kind of platformers I do like tend to be the kind where you can romp about and have fun without too much regard for pixel-perfect accuracy, and MM is pretty much the diametric opposite of that.  A great game, just not one that’s my cup of tea).

GoatUp, then (it was originally going to be called Goat Goes Up, in homage to one of its direct influences as we shall see, but then I found out that someone had just released a game called Sheep Goes Left {really, what are the chances of two ungulate-proceeding-in-a-particular-direction game names occurring within a couple of weeks of each other? I’d've bet I’d've been safe but apparently not!} and not wishing to confuse the issue by using a name too close to that I shortened it to GoatUp).

It’s a playful platformer, for the reasons I already mentioned with regard to Manic Miner.  I hate pixel perfect precision and that sphincter-tightening anxiety that goes with every move in such games.  I wanted to be able to bounce around on my platforms like a tiny caprine nutter, not worrying that I might die if I fell more than two inches onto a lower platform or if my hoof hadn’t been *right* at the very edge of the platform I just jumped off.  Sloppy, joyful, bouncy were my watchwords when designing the basic platforming action.  Physics could sod off in deference to making it feel nice to play.

I also make reference to various platformers of the pre-Super Mario Brothers era which I have enjoyed, or which have been particularly influential.

The goat was always going to be the goat out of Canyon Climber, one of the first platformers I played on the Atari 400/800.  I bought the game on tape in a computer shop in Southampton one weekend, largely on the basis of the first screen.  If you watch the video of the game I am sure you’ll see why I found it irresistible.

One thing always bothered me in that game though – when the little guy goes to blow up the bridges, what happens to the goats?  Sometimes the goats are on the bridges when he blows them up.  (In fact if you watch that video and look at the game’s last level you’ll see that a goat does have his revenge).

Another game that was a big influence was Miner 2049er, an old fave, again from the 8-bit Atari (I know there was the c64 version as well, but the Atari computer cartridge was my favourite version).

This game was a curious combination of painting game and platformer – rather than having to collect a certain number of objects and/or reach a particular exit as in most platformers, in 2049er one had to traverse every bit of every platform, gradually filling in the floor as you went.  Baddies could be turned harmless for a while and consumed, Pac-Man style, by grabbing various objects floating in the air above the platforms.

I also admired Bounty Bob’s relationship with his donkey.  It’s obvious they were very fond of each other.

Perhaps the biggest influence was a sort of inverse of the usual “climb to the top” style of platform game (and a much more recent game too, although on ancient hardware) – “Man Goes Down”, a homebrew game on the Atari VCS.

Man Goes Down on Atari VCS

This is a beautifully simple, impeccably-presented VCS homebrew that I’ve spent countless hours having “one more go” on.  I thoroughly recommend you fire up an emulator and check it out.  It’s more of an “endless faller” than an endless climber, but it’s definitely the major inspiration for GoatUp.  I’d always intended to do a game in that style of gameplay one day.

There’s lots more influences and references that I refer to and which you’ll see for yourselves as you play through the game.  I think most people will find some part of their platforming past mentioned at some point even if their tastes in such games weren’t identical to mine. 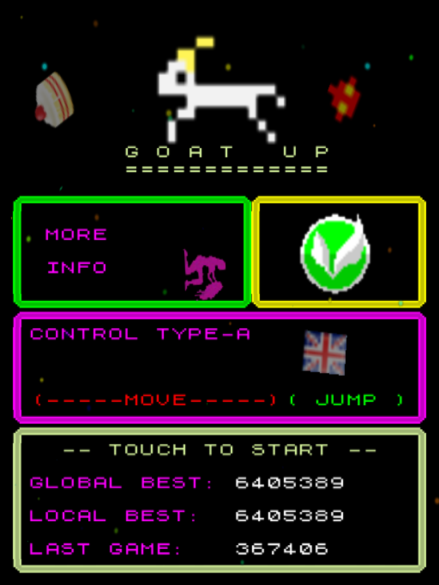 Simple, no-frills title screen, in keeping with the vibe of pre-SMB platformers, and commensurate with the fact that Llamasoft doesn’t have any proper artist.  The Speccy font is sure to give gamers of a certain age and nationality the warm fuzzies.

My games seldom come over that well in screenshots (not being a pixel artist, for me it’s all about how things move, and the colours, and the feel of the gameplay) so to get an idea of what the game’s like, have a goosey at this video of the first few levels of play.

I am sure you get the idea from that – it’s a frolic of a game.  No pixel-tight manoeuvring is necessary and you can bounce around like a flock of capering lambs

GoatUp is a cross between the “endless running” type of game – where typically you have to keep running across a terrain until some mistake stops you – and the “climb to the top” style of platformer.  It’s an “endless climber”.  Once you start climbing the platforms continuously scroll downwards and you must keep climbing to avoid falling off the bottom of the screen. 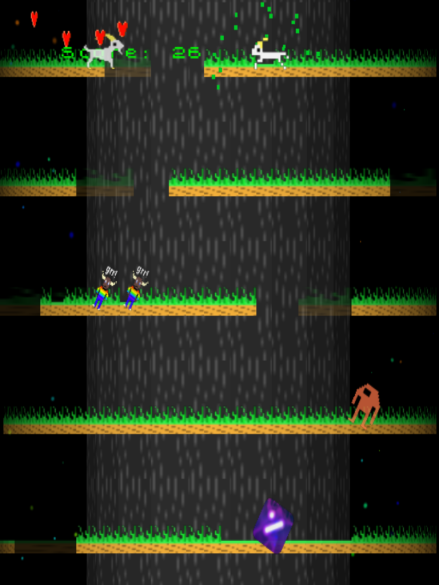 You can “graze” the platforms, eating the grass a bit like the way the platforms get filled in in Miner 2049er.  Unlike in that game, however, it’s not necessary to cover *every* platform and eat *every* bit of grass in order to progress.  Grass-eating and passing over the platforms reveals bonus items, which pop up out of the ground and can be collected to increase your score as you go.

In order to gain better scores you want to grow as you play rather than simply surviving.  This you do by becoming an entire flock of goats rather than just a single individual.  You do this by seeking out billy goats along the way, and kissing them. 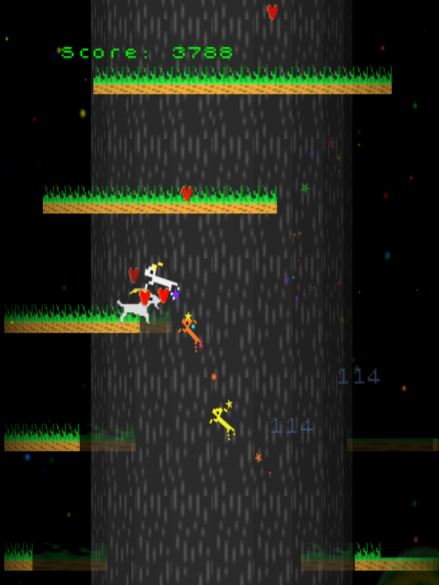 Once kissed, you must eat more grass to move things along (getting bonus items helps too), and shortly afterwards you will experience a happy event, and a little goat appears and starts to follow you.  Repeat this procedure as you climb and you’ll get a longer and longer trail of little goats behind you. 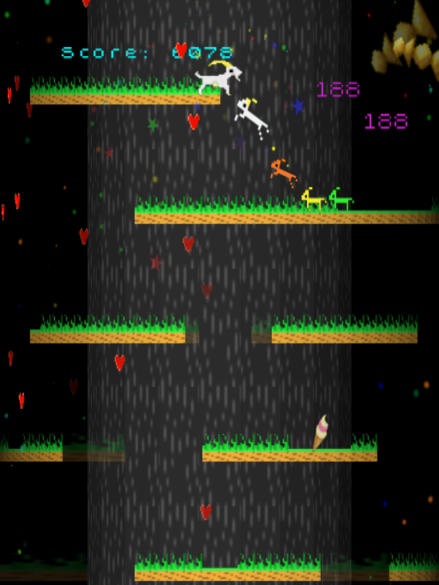 You want more goats for a variety of reasons – your score for bonus items, knocking off enemies and eating grass depends on how high you’ve climbed and how many kids you’ve got with you, so the more the better.  You can use your trail of kids as a weapon, too. 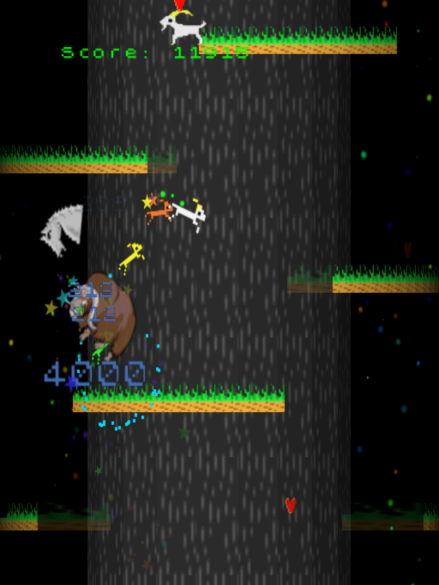 Although you can’t attack enemies directly (except when periods of invincibility are granted) if you can touch them with your trail of kids as you jump over them, you can knock them off and get more bonus points.  Here a large musk ox has been knocked from a ledge for 4000 points.

You’ll lose a kid if you bash into an enemy yourself, so you should be careful to try and keep as many as you can as you make your way up.  Spectacularly large families are possible with care 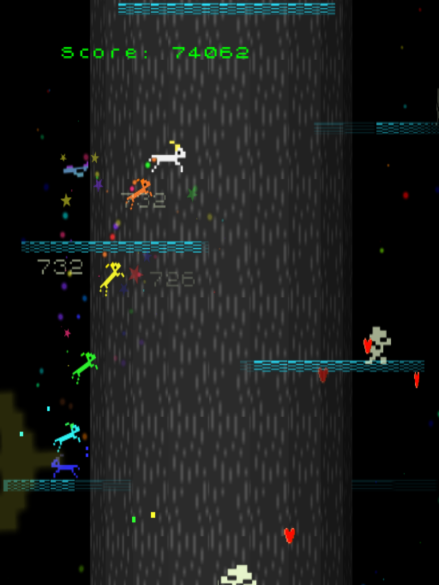 As you climb you’ll pass through zones that refer to some old favourite platformers from the past. 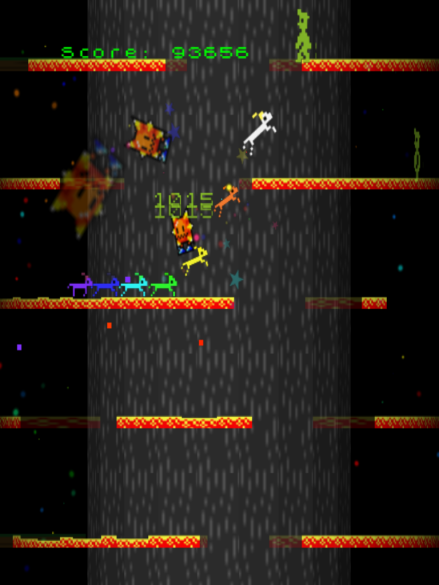 Miner Willy has a habit of landing on your head.  And the platforms there aren’t that solid… 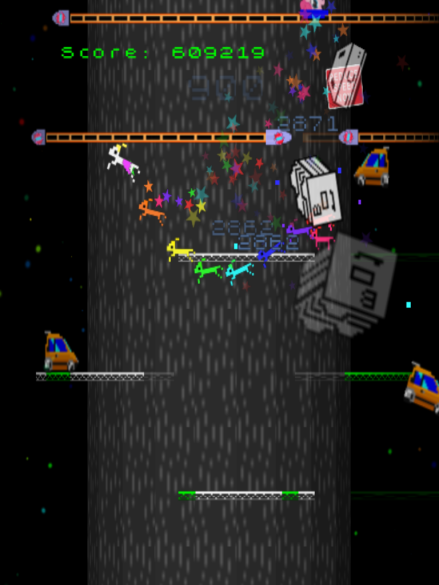 In the words of the ur-platformer – how high can you try?  And what will you find and see along the way, and just how big a family can you get? 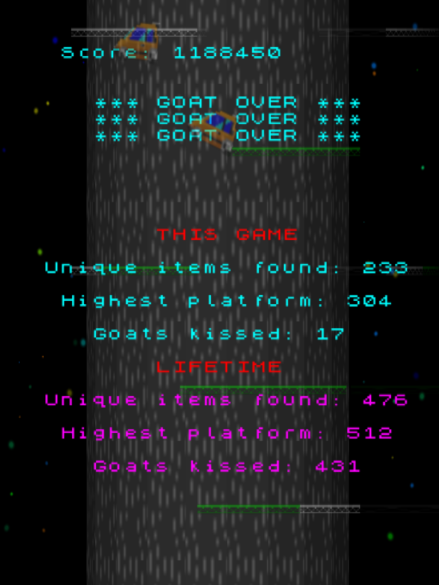 When your game is finished the stats are presented.  Online leaderboards are maintained on both OpenFeint and GameCenter.

Excellent controls for left- and right-handers are available, along with the option to play by tilt and touch, which allows for simple one-handed play on the smaller iDevices.

In all it’s a cute, fun game that’s simple for anyone to pick up and play, and I’ve very much enjoyed my first foray into the world of platformers.  I hope you enjoy it too