Welcome to the Caprichoso Arcade!

It’s difficult enough finding the good games out there given that there are so many things being released. It’s hard to know what to even look at. But I figure if you’re reading a Llamasoft blog page then you might enjoy some of the games that I enjoy (apart from the ones I make, obviously. You should buy those without hesitation and without the merest shadow of a doubt. Go on, go and get them all if you haven’t got them yet).

So I thought I’d start a new blog category in which the black ox with the blue star out of Super Ox Wars recommends some of the games we actually play when we’re not busy developing. If you’re stuck for something to buy (and haven’t bought every last one of our games first, of course) check the Caprichoso Arcade category for some ox-tastic reviews and recommendations. 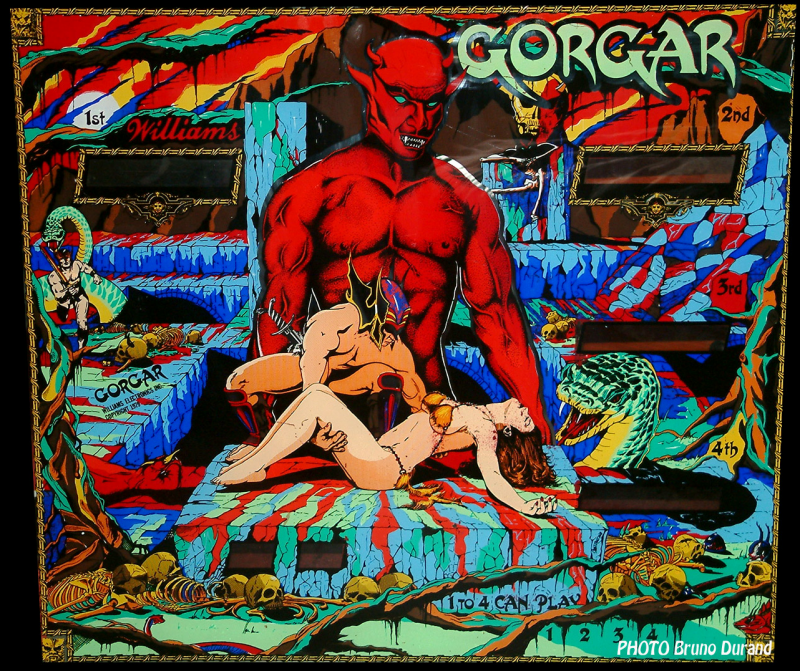 Back when I was but a young ox at university I used to spend a fair bit of my time in the student union arcade, as you might expect given what I ended up doing later in my life. I survived on a healthy diet of cheap imitation Jaffa Cakes and cans of Coke and directed a steady stream of loose change into Galaxian, Space Invaders, Tail Gunner and Asteroids. If I’d've paid as much attention to my studies as I did to the diving Galaxian Flagships and sphincter-puckering “little bastard” Asteroids saucers then perhaps I wouldn’t've been kicked out after only a year.

Video games weren’t the only things lurking in the student union arcade and halls of residency bars though. Many of us were held equally in thrall by the booming voice and mighty nipples of the fine gentlebeing you see above, who told all and sundry in no uncertain terms that his name was GORGAR.

Gorgar, Black Knight, Future Spa, Star Trek, Nitro Ground Shaker (which one frustrated and drunken student actually decapitated in a fit of rage one memorable night) – these were all pinball tables. Back then pinball had pretty much an equal footing with videogames in arcades (and in fact doubtless looked on the upstart videogames as mere whippersnappers, since the history of modern pinball goes back at very least to the invention of the flipper in 1947). Most of the students at university would have grown up being familiar with pinballs from seaside arcades and suchlike – rattling and clanging great electromechanical beasts which, although fun, did seem a bit quaint and primitive when compared to the new delights of Space Invaders and Galaxian.

The pinball industry didn’t take this lying down, however, and the same microprocessor chippery that powered the videogames started to appear in newer, more complex pinball tables too, and these found their way into the university arcade alongside the videogames and were played just as keenly by us students. I didn’t know it at the time but Gorgar’s booming voice and racing heartbeat were created by a pinball designer at Williams Electronics by the name of Eugene Jarvis – who would go on to create some of the best and most memorable arcade video games of the early 80s.

Pinball is an excellent game, and satisfying in quite a different way to the videogames, although the objective is the same – get the highest score. Pinball seems more present in the real world than videogames, controlled as it is not simply by flipper button presses but also by the wholesale shaking of the machine. To have a good game takes a degree of luck as well as skill, and it’s very accessible to players of all experience levels – a good player can have a bad ball, and a novice can have a great ball, so (except in the case of real pinball wizards) usually everybody has a chance of doing well and winning a game.

It’s not easy to have a real pinball table at home, though – a table is an expensive and substantial piece of furniture, and the complex electromechanical innards need care and regular servicing to keep working properly. So through the years there have been various attempts to create videogame versions of pinball.

The earliest attempts on early game consoles and early home computers were primitive affairs, often so crude as to bear almost no resemblance to the game they were trying to recreate. But as the years went by processors and graphics chips got powerful enough to sustain games that provided a recognisably pinball-y kind of experience to videogame players.

Some of the best videogame tables took advantage of their virtual nature to provide tables full of active targets and animated playfields which could never have been achieved in the real world. One which me and my mates got very addicted to was “Alien Crush” on the excellent PC-Engine game console of the early 90s. 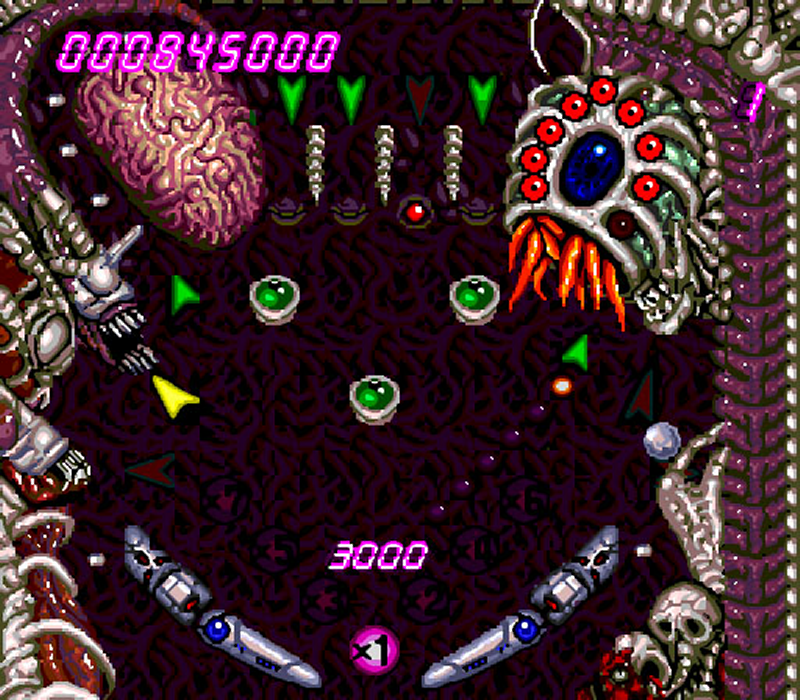 This was a two-level table with fast and fluid gameplay marred only by the somewhat jarring flick-scroll between the top and bottom halves of the table. Make the correct shots and that brain would split open and monsters would come out to be hit by the ball. Bumpers rearranged themselves on the table as you played and some shots led to mini-tables upon which bonus games took place.

Even better was the sequel to Alien Crush, also on the PC Engine, called “Devil Crash”. 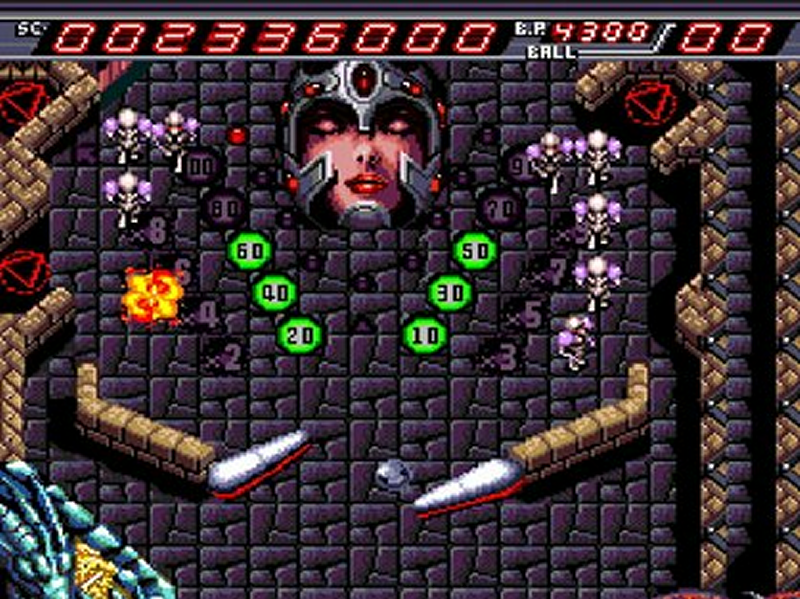 This table was three screens in height, and the whole table scrolled smoothly to follow the ball as you played. There were even more bonus games to find and play as you worked your way through the targets on each level. Getting the ball into that lady’s head caused her to gradually transform into a giant lizard (David Icke would have loved it). We spent many a fine weekend huddled around the PC Engine playing endless games of Devil Crash.

The videogame tables were all well and good but they were definitely more videogame than they were real pinball. It wasn’t until the mid 90s that it became possible to attempt the kind of real-world physics modelling that would make possible convincing simulation of tables that existed in real space. The first such simulation I encountered was the excellent Eight Ball Deluxe for PC. 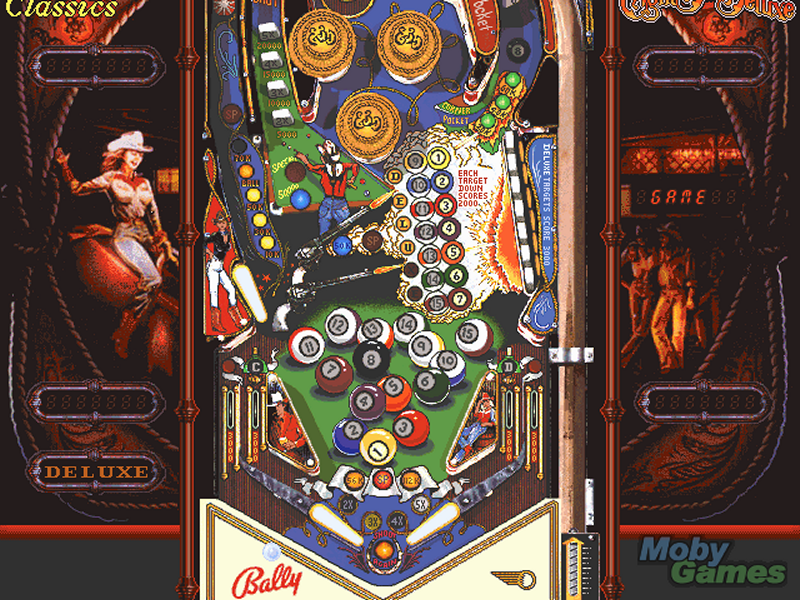 I’d just moved to the US at the time this came out, and another mate of mine had moved there 6 months earlier and we used to meet up and hang out in the evenings. Many of those evenings were spent in front of the PC obsessively playing Eight Ball. It seemed inpossibly difficult at first, way more demanding than the more videogamey efforts we’d played before; but just like with real pinball, practice yielded results and we had some great evenings challenging one another’s highscores in front of the old 486.

Sadly these days the physical pinball table is in danger of becoming extinct. There’s only one manufacturer still making new tables; pubs and arcades rarely have any pinballs, and increasingly the only tables to be found are those in the hands of enthusiasts and collectors. There’s a whole generation of gamers growing up who might never have seen or played a real pinball game at all. Luckily for us though there are still some very good videogame pinballs to be found, and one company is undertaking a project which sets out simultaneously to preserve in simulated form some of the very best classic pinball tables of all time, and to provide a lot of pinball fun to us gamers as they do so. And so we have Farsight Studio’s excellent Pinball Arcade.

This is available on just about everything, as detailed above. I have had the iOS version for the last few months and I’ll be picking it up on the PS3 and Vita when it comes out on those machines later this month. $10 gets you the game with 4 tables included – Tales of the Arabian Nights, Ripley’s Believe it or Not, Black Hole and Theatre of Magic. Buying the PS3 version gets you the Vita version for free. 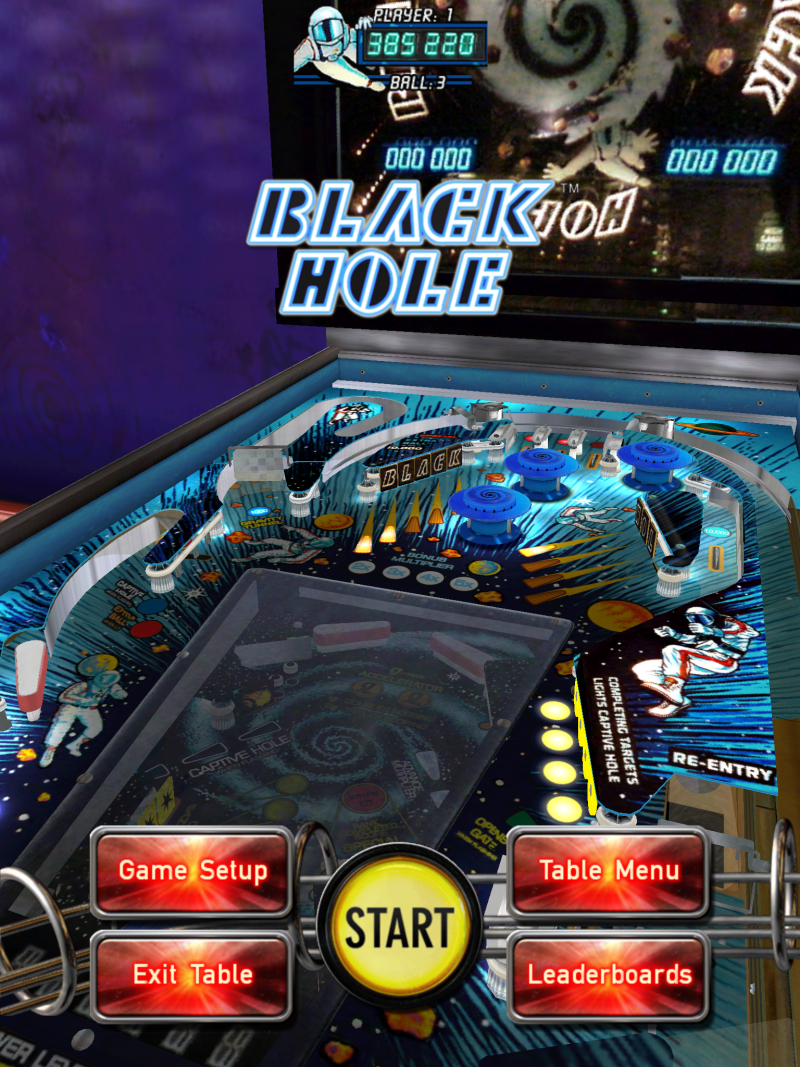 This is my favourite table of the initial four, Black Hole, as seen on the iPad. It’s an older table than the rest, and has considerably less table clutter in the form of ramps and toys than you see in more modern tables, but that’s part of the reason I like it so much; the table is very open and gameplay satisfyingly fast and challenging (it takes quite a degree of effort just to get the table to multiball compared to some of the modern tables that hand out multiballs like candy). You can shoot balls down into a lower mini-table – the Black Hole of the title – and even start multiball on both table layers at once. 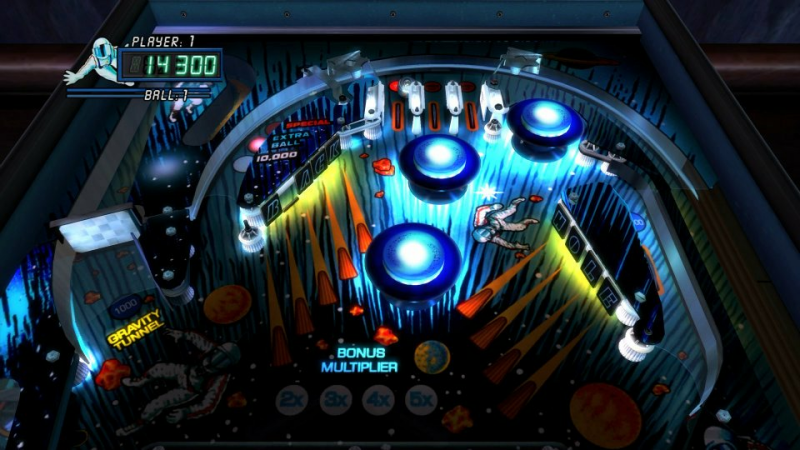 Here’s a view of Black Hole on the ps3 – the additional power of the game console affords the tables more complex dynamic lighting, something I’m looking forward to seeing when the ps3 version comes out. 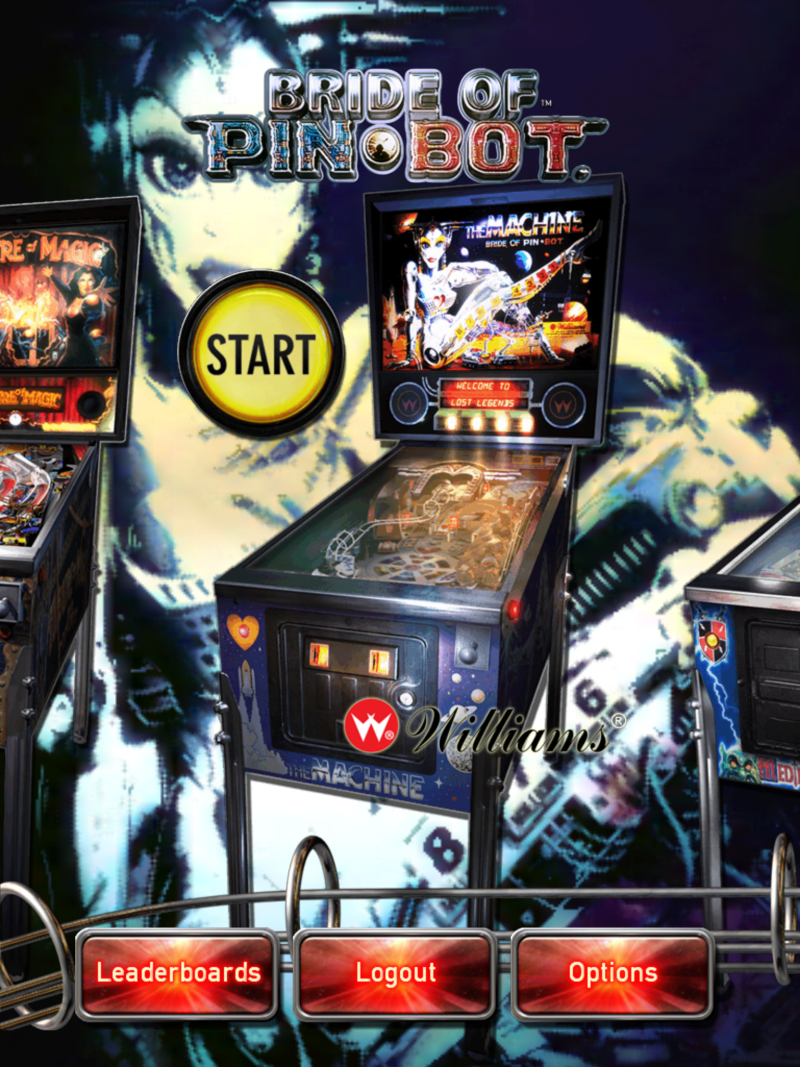 This is the table select screen on the iPad. As I mentioned this is an ongoing project to preserve a multitude of classic pinball tables and Farsight are offering them to players at the rate of two a month as DLC, and plan on continuing to do so for the next two or three years! The pricing of the DLC is very reasonable, at less than the price of a pint for both tables; I look forward to collecting a huge library of classic tables to play whenever I fancy a quick flip of my balls. 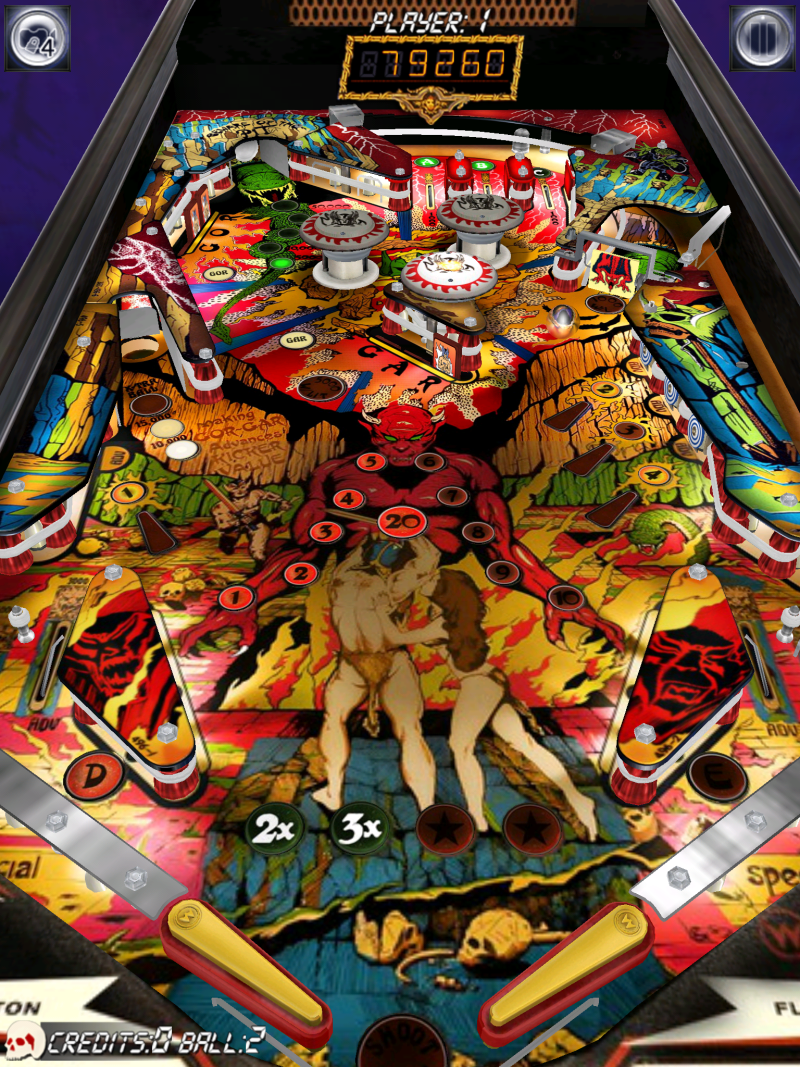 I’ve already been reunited with one of my old friends from University – the mighty Gorgar, with whom I have been very much enjoying getting reacquainted. Black Knight is due out later this month too (although it won’t be quite the same as the one we had at uni, which for some reason spoke French and kept ranting in a robot voice about “CHEVALIER NOIR”).

Pinball Arcade isn’t perfect – there are occasional problems with the camera views, a couple of the older tables are simulated rather than emulated which can lead to some small inaccuracies compared to the real thing (but most of them are pretty accurate since they actually emulate the CPUs of the original games and run their native code). Issues are generally being addressed pretty quickly and updates are frequent, and anyway such little glitches as there are rarely spoil a table entirely. The release of tables on the game consoles tends to lag behind those on iOS and Android, primarily because of the significant lead time on the certification process for the console platforms (that stuff is way easier on iOS/Android). And for some inexplicable reason Steam don’t want to take it for the PC. Nudging is a bit hit and miss on iOS but is apparently much better on the consoles.

It may not be perfect yet but it’s getting better with each iteration, there’s a long list of classic tables on the way, and I’ve already had way more than my money’s worth of fun so far with the iOS version. Really looking forward to having it on the ps3 and Vita too.

Best of all by buying Pinball Arcade you’re supporting an ongoing project that’s preserving great games that are becoming increasingly rare in the real world, and offering them up for gamers everywhere to continue to enjoy. And it’s very good value; you’re getting an awful lot of pinballing fun for not very much money.

Very highly recommended by this ox.

More details available on Farsight’s website (watch the video about how they model the tables!) at the following link.

And finally, a word from my old mate Gorgar.

This entry was posted in Caprichoso Arcade. Bookmark the permalink.