Well that took a little longer than expected but Goatup 2 is finally off to Apple. Hopefully it’ll all go well there and if so should be available in about a week. This is the first thing I’ve done that involves having level editing and the ability to share game files, and I know Apple can be a little wary of stuff that does that, but I’m hoping it’ll be fine since I’ve done the filesharing part totally by the book through iTunes, and anyway the game files themselves don’t contain any executable code at all, there just a map of brick and object types and positions. 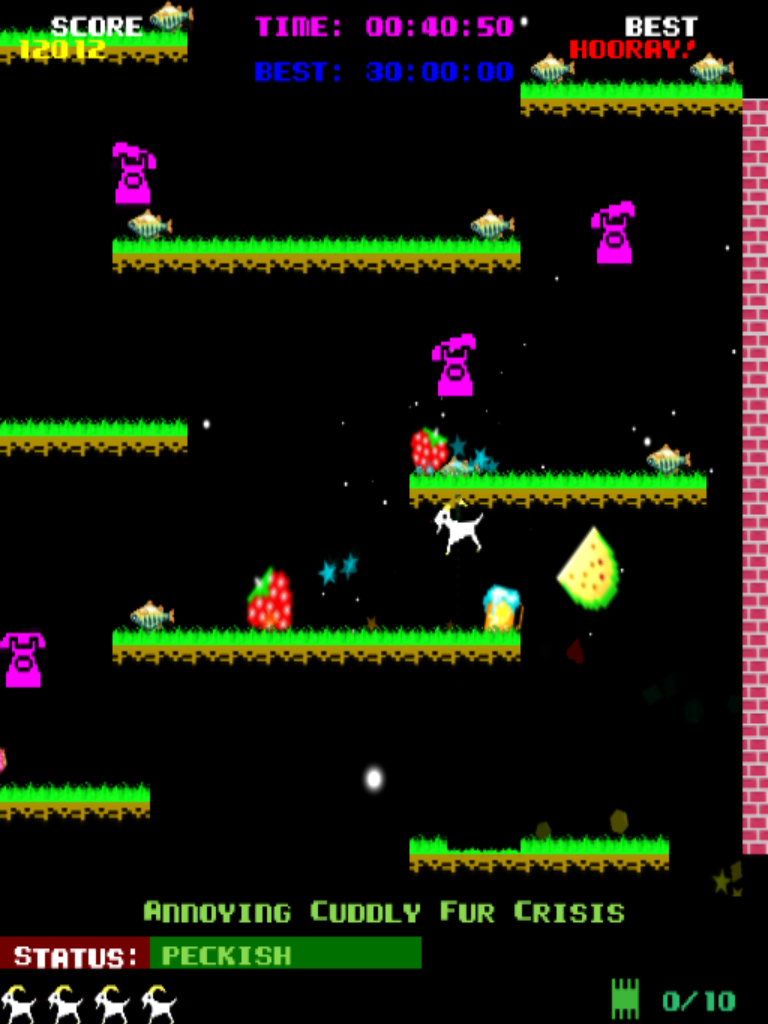 So what kind of game is Goatup 2?

It’s different from Goatup 1 in that it’s no longer an endless climber. It’s a more conventional platformer, with games consisting of a set of self-contained levels. It’s obviously influenced by games like Manic Miner and Miner 2049er, in that you have to traverse the level collecting keys, which then cause an exit to open, allowing you to leave the level.

It’s nowhere near as demandingly finicky as Manic Miner though. By now I am sure you know that I like my platformers to be very flow-y and sloppy with the emphasis on joyously bouncing around rather than sphincter-clenching over every little jump. So the main difference between this and, say, MM, is that in GU2 there’s no penalty for falling from any height. I’ve always hated that in platform games – fall more than 2 inches, BAM you’re dead. So in GU2, if you can land a jump on a platform, you’ll live. Of course there has to be a platform there – you can still fall out of a level to your doom. And you will, oh yes, you will.

Also unlike in Manic Miner you get to kill your enemies. The same mechanic that allows you to attack enemies also allows you to make midair jumps – and it is the humble fart. 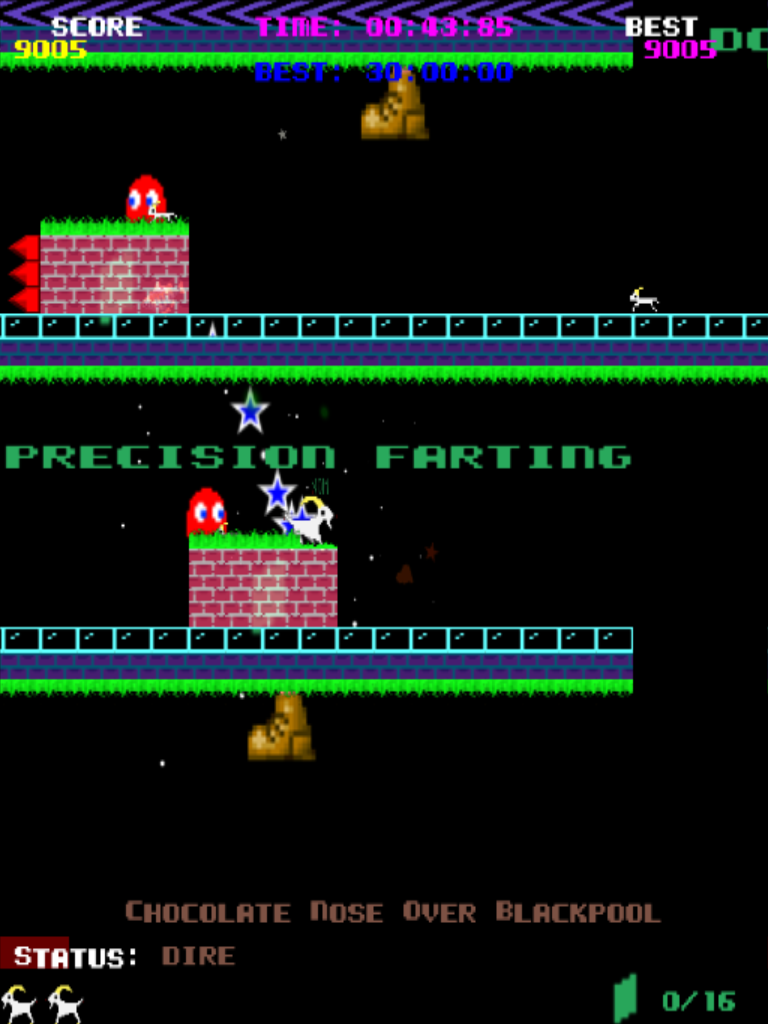 As in Goatup 1, certain objects that you collect trail behind you in a long stream. In Goatup 1 those objects were kids (and you “collected” them by giving birth to them). In Goatup 2 these objects can be kids (which you find on platforms, since you are a billy goat this time around) or other things like level keys, the Queen, or a chicken vindaloo curry. 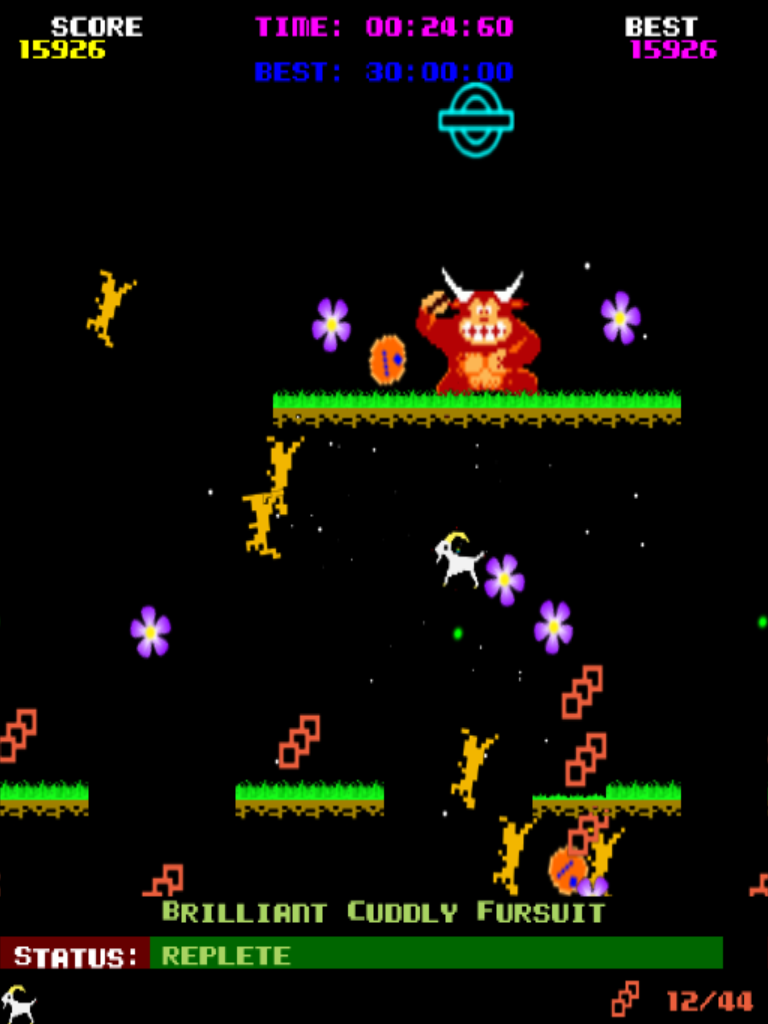 Each object you collect behind you can be traded for one fart. So if you collect a bunch of objects you can effectively fly, Joust-style, for a while by repeatedly pressing the jump button. Under certain circumstances (having a curry when the Queen is not looking) you can have unlimited farts for a few seconds, during which time you can use your extra mobility to explore otherwise unreachable parts of levels, or to attack clusters of enemies.

Yes, your flatus can be directed at enemies, and in most cases it will knock them off their platforms and out of the game. In all it makes for a game that is like a Bomb Jack-type platformer crossed with a shooter. Crossed with Joust. Kinda. And the shots come out your arse. Which may sound weird but is actually pretty fun. 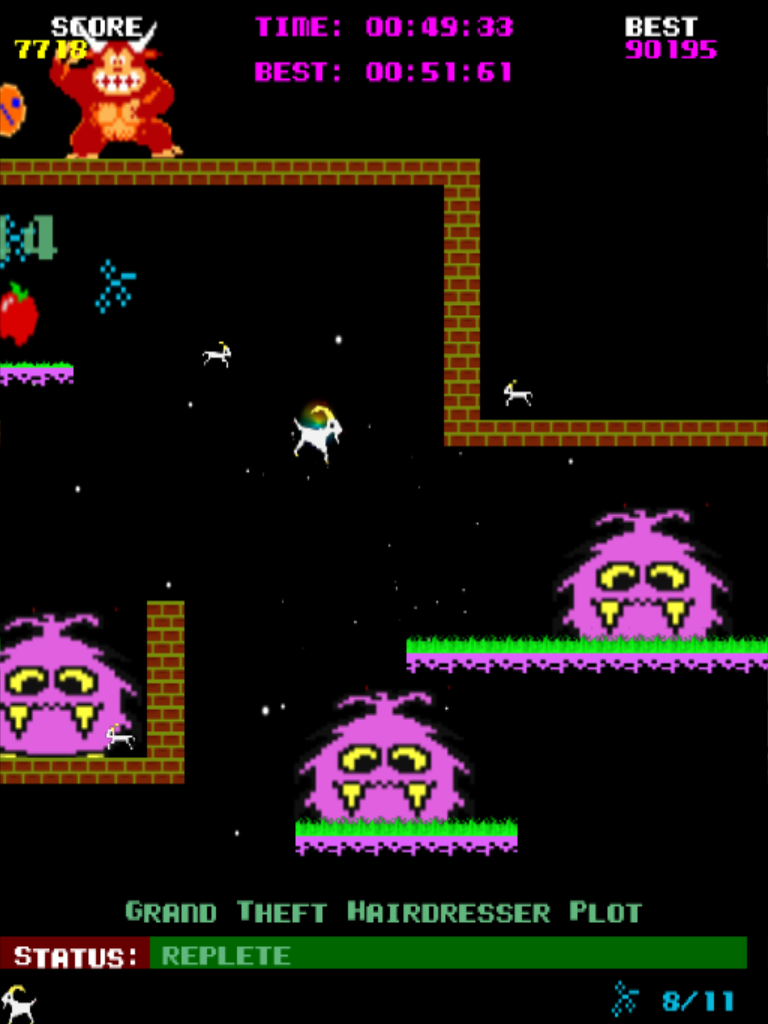 Of course it is quite possible to make levels with no farting by simply designing them without any fartable objects to collect, so an individual designer may choose to make levels far more tricky and less loose and sloppy than my own. And that’s good

You can also place The Queen in a level. If The Queen is collected, she starts watching the goat from the side of the level, and of course with Royal eyes upon you you can’t possibly fart. Until you find a curry… 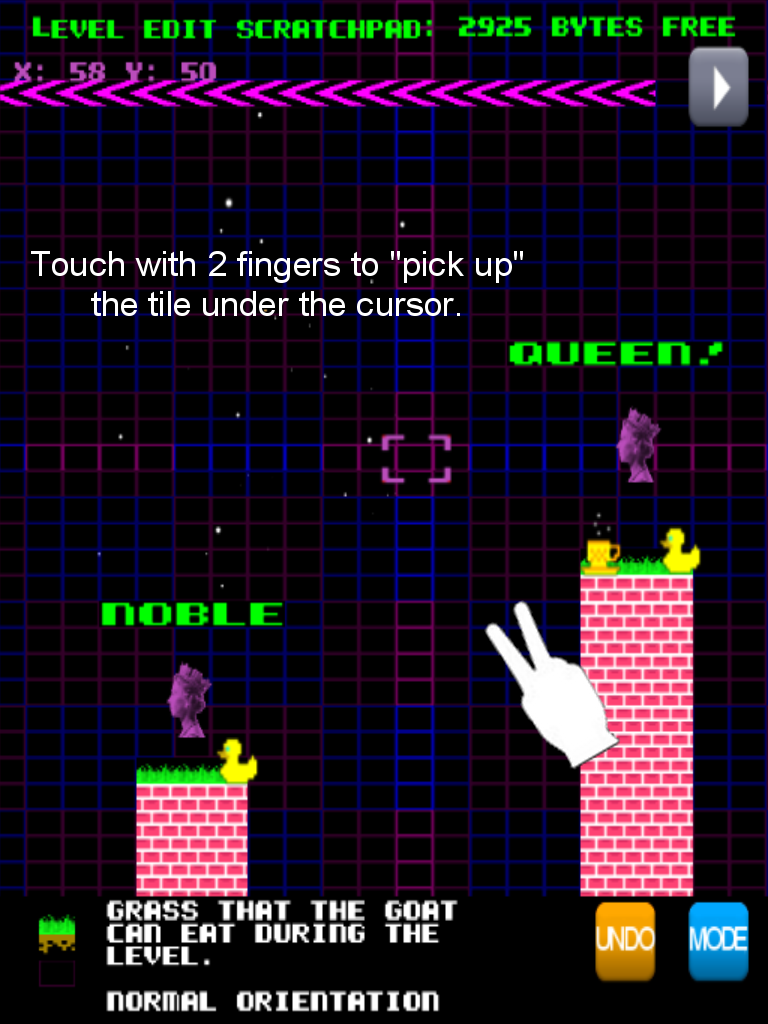 The game ships with 4 default level sets (a level set is referred to as a “game” in the editor) of 20 levels each. Game 1 is a set of levels that start extremely easy to introduce the player to the gameplay. Game 4 is a level set that uses a level template and then varies it by using the various types of bricks, objects and enemies that are available in the level editor. It should serve as a good introduction to the game components for those who want to try making their own levels. 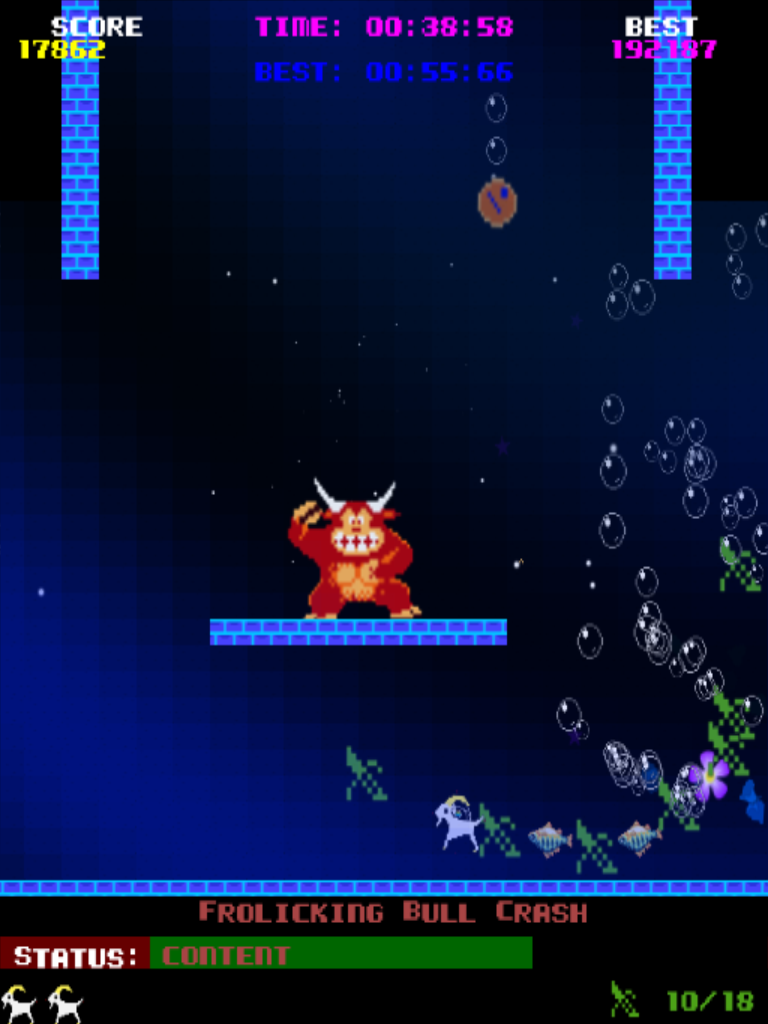 Games 2 and 3 are a collection of levels by me, PVB and Precious Pony. With 80 levels there by default there should be plenty there for people to get stuck into even before they consider using the editor or importing other people’s games.

Game 1 is locked and its levels can’t be edited. This is simply so that we can have online leaderboards that make sense for at least one set of levels. If people could edit those levels they’d change the difficulty and scoring, rendering any leaderboards useless. So the game 1 levels are fixed. There are four leaderboards: Pure (best score in game 1, starting from the beginning); Lifetime (the best score you ever got on each level in Game 1, totalled); Pure Time (fastest time for completing all the levels in Game 1) and Lifetime Time (the sum of all your best ever times on each of the levels in Game 1). So you can play the levels for score, or try and speed run them for time. The two different objectives lead to quite different ways of playing each level, so there’s plenty of scope for replaying, and for either sitting down to do a nice long Pure game or simply dipping in to try to improve one’s score or time on a particular level.

Scores and times are saved locally for the other games too, just not put on a global leaderboard, as that makes no sense for editable level sets.

You can still copy any of the levels out of Game 1 and paste them into another game if you just want to look at how they are made and modify them as you see fit. 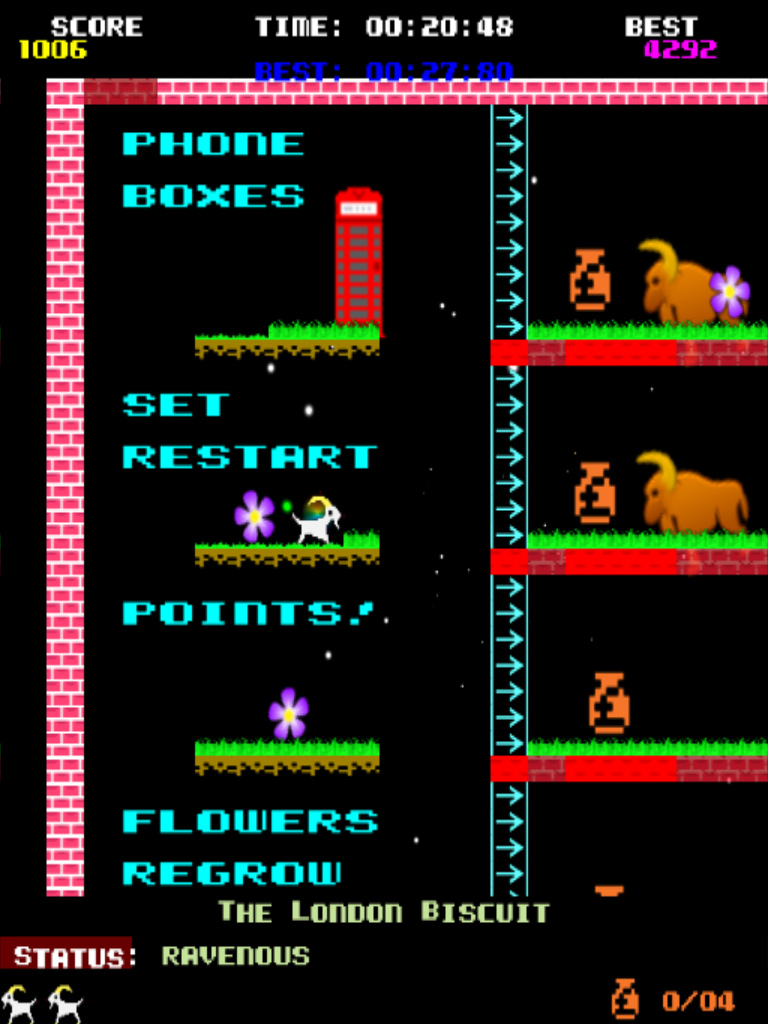 Here is a bit of one of the levels in Game 4, showing the use of telephone kiosks, one-way doorways and bulls.

Of course I am hoping that people will start to use the editor and make their own levels too. I thought building an editor would be pretty quick, and yes, it’s not too hard to have something basic up and running in a short while. But making an editor that’s actually stable and suitable for anyone to use is actually a fair old undertaking and it’s taken a while. But in the end I think it’s come out pretty well, and whereas it’ll never be as convenient as something PC-based it actually works nicely, allowing levels to be built easily and tested quickly right on your device. It’s even just about usable on the iPhone, although it’s obviously easier on the iPad. I made all my game levels on an iPad mini, some of them whilst on the toilet. That’ll do for me 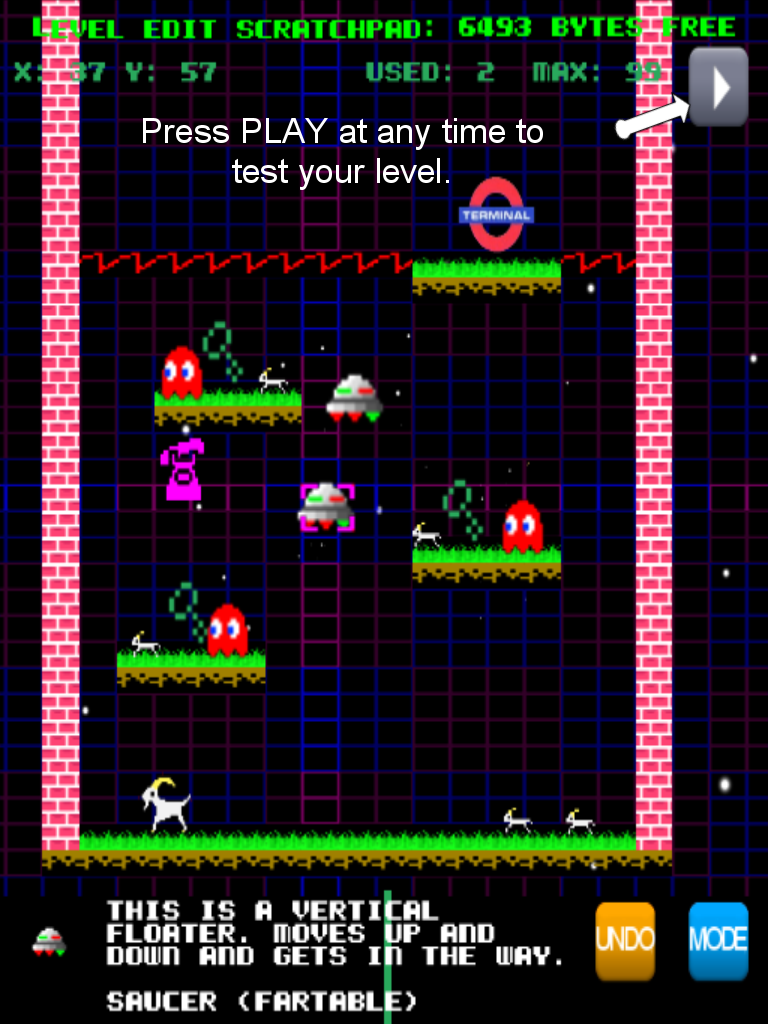 I’ve tried to keep the editor as simple as possible – basically there’s a large area at the top of the screen where you can scroll around the entire tilemap, and a little strip at the bottom where you choose which bricks and objects you want to add to the level. Adding stuff is as simple as drawing it on the screen using your finger. At any time you can press the PLAY button to try out your level.

I’ve made a little guide about how to use the editor. You can view it here, or in-game press the HELP button on the Game Select screen while in Edit mode.

Here’s a couple of videos showing some gameplay and some editor usage that I’ve published before, but which may be interesting if you haven’t seen them yet or just want to get an idea of how the game looks in motion. These are a couple of months old now and some stuff has changed, other stuff has been added, and most things tidied up. But these give a good idea of what the game’s all about.

This shows some GU2 gameplay.

And these two show the editor in use.

The game will be on sale for £2.50 – yes, we’ve decided to move away from the super ultra lowest pricing on the App Store. It’s simply not working out for us to release things at those prices. We’ve done 9 games now so we have a pretty good feel for how things are going and super low prices simply aren’t working for us. We feel that most people who like the work we do wouldn’t begrudge us the price of a pint once every few months, as opposed to the price of a Lion Bar. And as part of our future strategy rather than concentrating on putting out a lot of small iOS games we’re going to aim to do slightly longer projects, on the order of 6 months or so each, and which will be cross-platform on Mac and PC as well as on iOS and Android.

Even so I bet there will still be one or two people who will complain that our games are now “too expensive” at £2.50. But as I said it’s only the price of a pint, and it’s still about one third of what a Llamasoft game cost in 1982!

The upside is that by taking a bit longer to do crossplatform games I should be able to come up with some stuff that’s a bit deeper than most of the iOS work I’ve done, and I think you’ll be quite interested by what I have in mind for my next project. Which will be revealed in due course.

Until then enjoy GoatUp 2 and let’s be seeing some of those user-created levels! I’ll collect up a bunch of my favourites and put them up on the website when there start to be a few around.