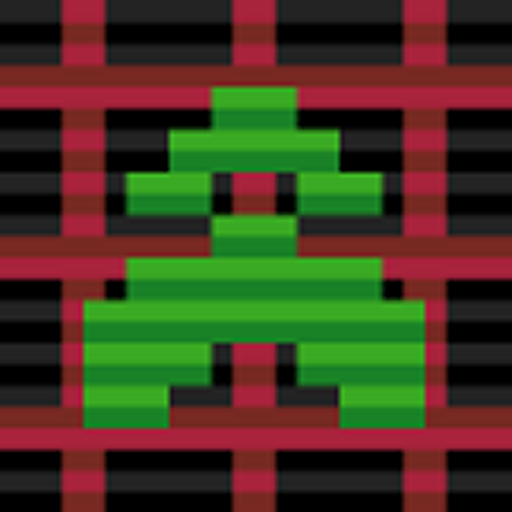 Well I didn’t expect to be posting another “submitted to Apple” entry quite so soon after the last one, it’s only a few weeks ago that we released Caverns of Minos. This one came together rather quickly.

I’ve intended for a while now to do the occasional “historical release”, where I revisit some of Llamasoft’s old back catalogue. However I don’t want to be forever churning out remakes of old games, as making up new ones is generally much more fun. I also hate the idea that some old devs have that back catalogue stuff must be “monetized” by releasing an emulator image and then charging for it. If you’re going to use back cat titles at the very least make something new and nice based upon them, don’t just try and cash in with a 20 year old emulator image, that’s just sucky.

Anyway. Once in a while I intend to have an occasional revisit of an old title, but I’ll do it nicely rather than just as a cheap ass cash-in.

So, Gridrunner was first up. Why Gridrunner? After all I’ve revisited that game so many times over the years maybe it might have been better to do something else? Well, the main reason for choosing Gridrunner to start was that I didn’t want to spend a lot of time doing a remake, and I always intended this as a tier 1 bang it out quick kind of release (didn’t realise it’d be *this* quick mind). And I already had C++ source code for simulations of the Vic-20 and c64 versions of Gridrunner that I’d made for inclusion in our PC game Gridrunner Revolution. I figured since I had that code already it ought to be pretty easy to port over to the iOS engine, and indeed it was, a couple of days was sufficient to have those games running nicely on iOS.

A couple of 8-bit ports on their own wouldn’t cut the mustard though; they’d be nice to include as free extras but I needed a proper new Gridrunner game to accompany them. Now I’ve been all over the place with Gridrunner over the years – if you check out the History of Gridrunner page on this very site you’ll get an idea of how much ground we’ve covered in Gridrunner’s name.

This time, though, I wanted to get back to basics and to make something closer to the simple origins of the old 8-bit game. Also, both the 8-bit Gridrunners were in a landscape orientation, since that’s the shape that tellies were – but I rather fancied doing a portrait version, because portrait stuff looks lovely on the iCade. And thinking of the iCade I decided on a theme – let’s have a version of Gridrunner in the style of an old arcade machine. If Gridrunner had been a coin-op how might it have looked?

Of course this is a Minotaur Project release so as usual we borrow the style of the old coin-ops but inherit none of the limitations. We can just have fun and make a slick shooter that evokes fond memories of those old arcade days. So of course the game needs an attract mode (almost a forgotten art these days, sadly).

Straight back to basics with the gameplay – no fifty levels full of fifty different kinds of baddies here. You get your basic enemy types, and they ramp up in aggressiveness the more you progress. Which isn’t to say that you’re not going to see the odd surprise here and there the deeper you go into the game; but definitely this is the most “pure” reworking of Gridrunner since the original. 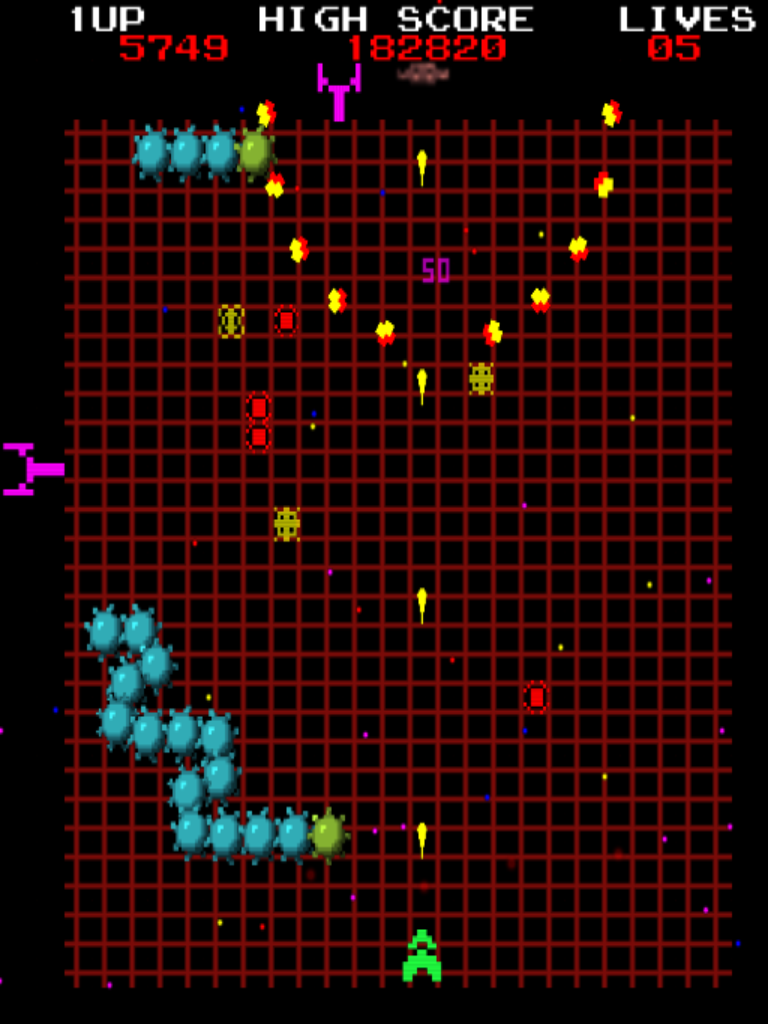 A little green ship is you!

The little green ship, the red grid, the snake enemies – familiar ground to former Gridrunners. Here we’ve just shot open one of the shrapnel bombs that are new to this version. 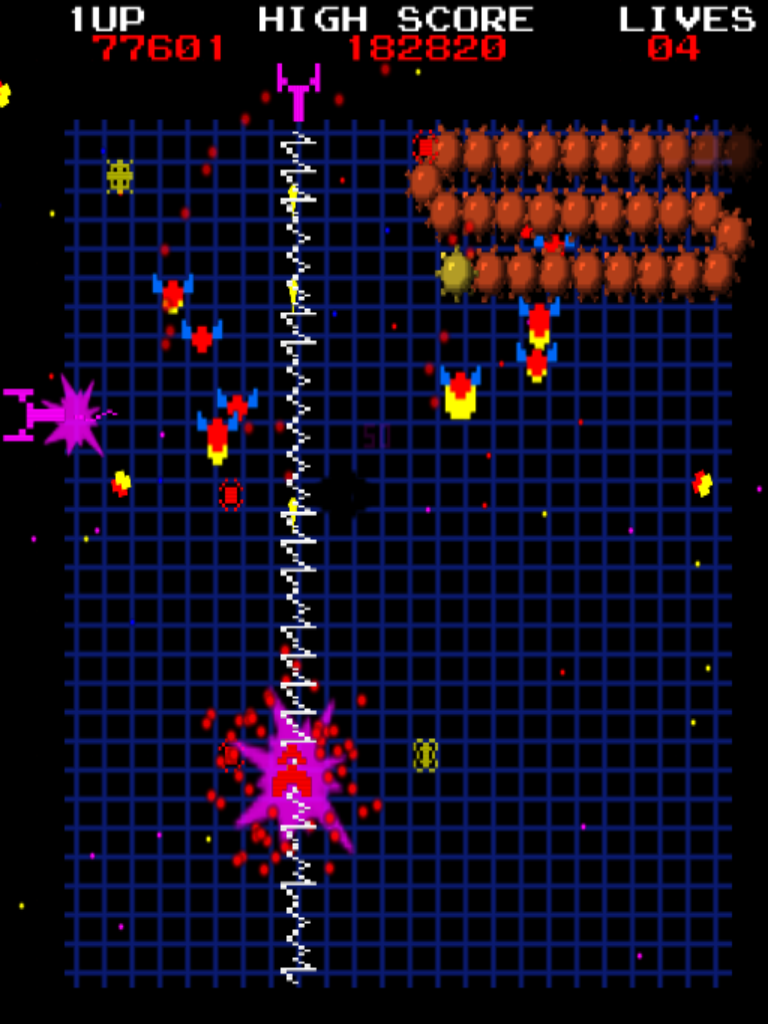 All our bombs are belong to you.

Near the end of one of the blue grids, a swarm of shrapnel bombs is easy to shoot but requires some dexterity in dodging the resultant shrapnel sprays whilst taking care of that long snake feeding in from the top right.

Also, BASTARD LASER. Would absolutely not be Gridrunner without a bastard laser, now would it? 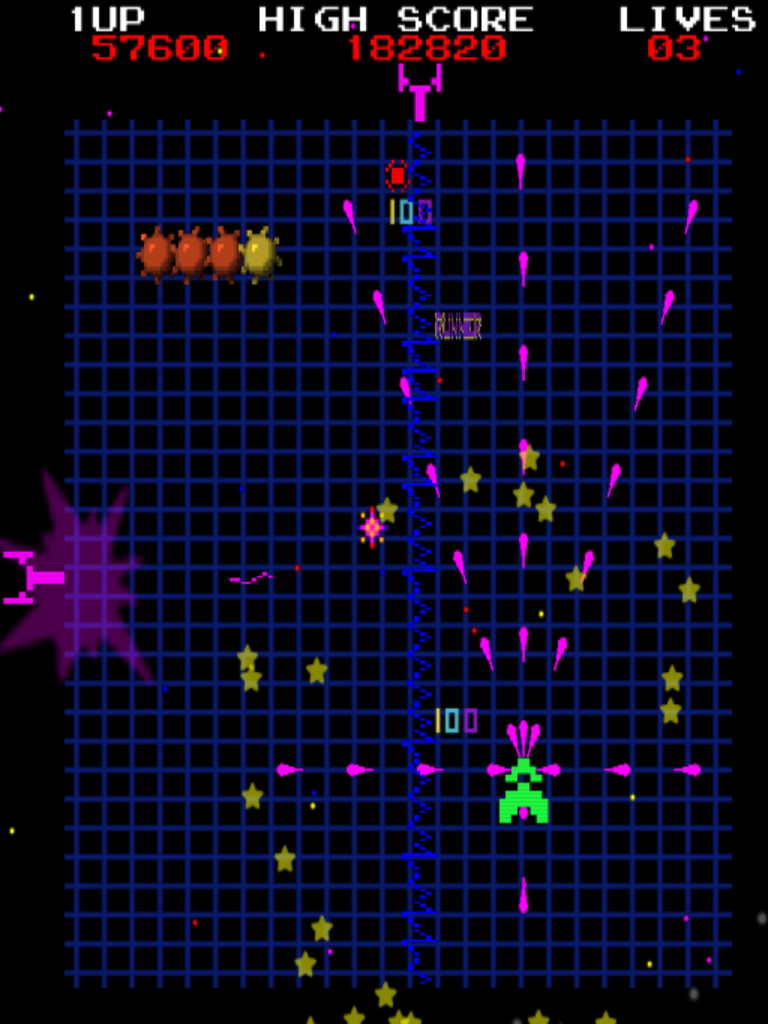 Twilight Sparkle would approve of these purple shots.

Fortunately one of the additions I’ve made to the original is to bring in lovely lovely powerups with which to smite thoroughly the burgeoning foe. There are eight powerup types gained by collecting colourful spinning rings that emerge from shot enemies. 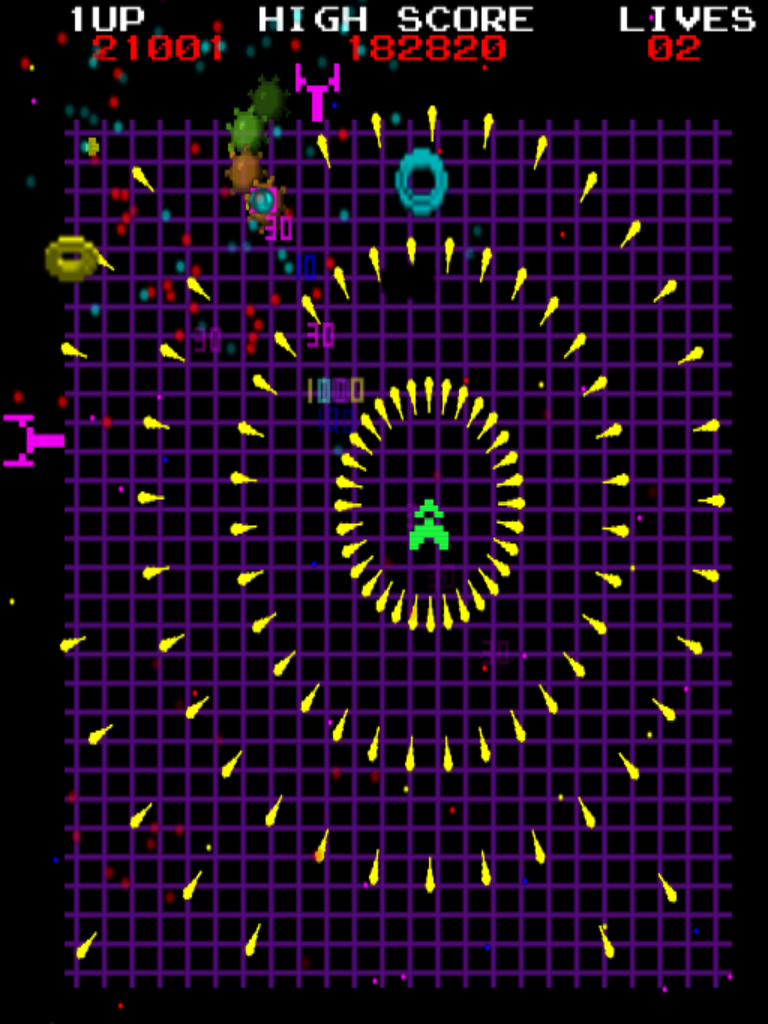 Bullets. I got them.

Each type is fairly shortlived, but they are stackable – usually collecting a second powerup of the type you’ve already got extends the usage-time, and you can pick up shot speed multipliers to turn the likes of that ring shot there into OMG I AM BECOME BULLETS for a couple of glorious seconds.

There is a restart system to allow players to restart from higher levels; the restart points occur every 4 levels (the grid and enemy colours change every 4 levels too. I was inspired by remembering the different coloured webs in Tempest back in the day. “Getting to the yellow levels” was a thing. So I thought it’d be nice to accompany restart points with grid colour changes).

. It’s only tier 1 too so there’s really no excuse at all for not getting it.

This is the full attract mode.

Here’s a closer look at the first few levels.

And here it is being played on the iCade.

see you on the leaderboards soon I hope