Sunday again so it’s time to have a bit more of a rummage through the back cattle-log of the good old Vic.

The first game took me rather by surprise as I was trawling through Gamebase, since at first I thought a wrong screenshot had come up for one of the games. Took me a couple of looks to be sure of what I was seeing. Understandable I am sure you’ll agree: 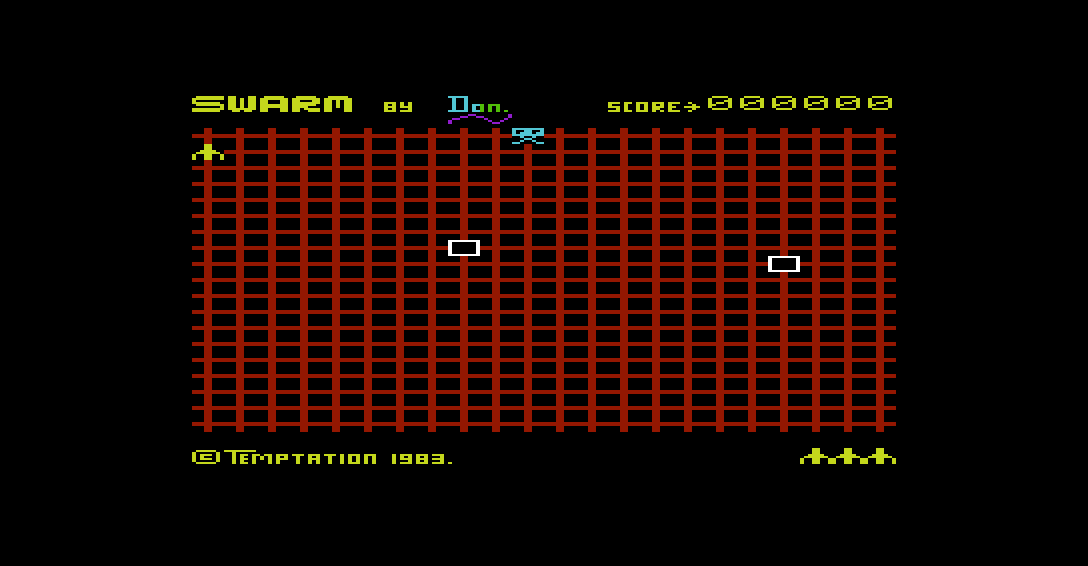 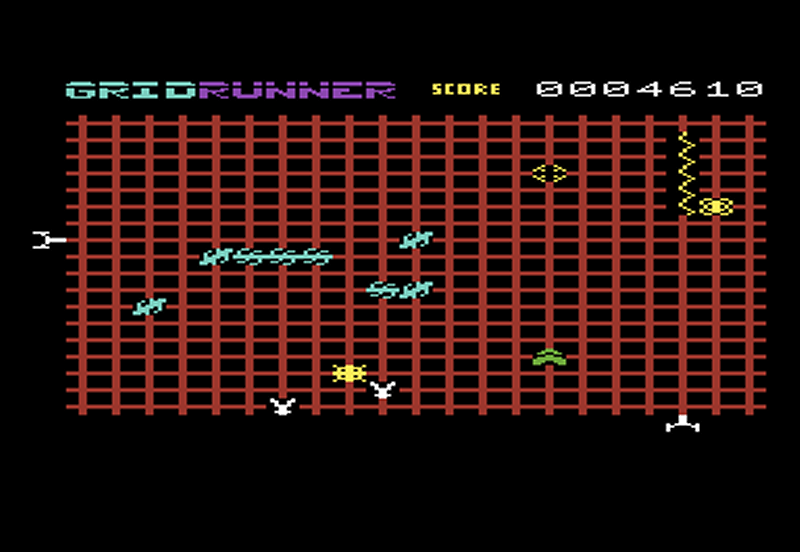 Bit of confusion there, definitely caused me to do a double take.

The game itself is a weird old thing, it must be said. There’s a blue guy a bit like the Snitch out of Matrix who runs across the top and doesn’t do anything discernable at all apart from that. There are boxes which turn into more boxes if you shoot them, and everything changes state once in a while a bit like the Pods in Gridrunner. Some things eventually turn into green things which we like. Some things turn into other things that bounce around diagonally when shot. Those are the things that usually kill you.

Quite why the guy decided it’d be a great idea to make it look almost identical to Gridrunner I don’t know. It would have been easy enough to use a different tile shape to make the grid look slightly different, or even use a different grid colour.

Next up and continuing the theme of stealing bits out of my games we have “Minitron” by Anirog.

This is a sort of minimal version of Robotron for the unexpanded Vic-20 (if you can call anything with pixels that size “minimal”. It’s actually ok in a very raw kind of a way (but would have been improved immeasurably with just a couple of tweaks to the firing mechanism) if you don’t mind graphics so chunky they could have your eye out. The character font is lovingly stolen from Attack of the Mutant Camels on the C64. As you’ll see in the video Game Over isn’t properly debounced and in the heat of the action it’s possible for it to happen invisibly and unless you’re paying attention you could miss it. Ultimately lack of variety and lack of space exhaust the fun in this one after more than a few minutes, but it’s not as diabolically, unrelentingly awful as some of the stuff people put out for the unexpanded Vic.

While we’re on the theme of stolen character sets let’s have a quick goosey at “Fire Galaxy” by Kingsoft:

In the commentary I actually malign this game for excessive chuffing, but I discovered afterwards I’d left an instance of the previous game running in the background and it was that that was chuffing while I was playing this. This definitely was making noises a lot like a guinea pig we used to have when i was a nipper though.

The game itself is a rather chunky but not unremittingly awful version of “Scramble”, featuring my character set from out of “Andes Attack/Defenda”. It’s not terrible but not particularly engaging either, and one go is plenty for anyone really. Kingsoft are notable in Llamasoft history as the creators of the Turboload system on the C64, which I licensed off them for use in our games starting with Revenge of the Mutant Camels. They also did a version of Stargate for the expanded Vic which is fairly well ugly but actually rather good to play. I’ll do that one of these days.

To follow that we have “Frantic” by Imagine. If you want to see one of the reasons Imagine went bust you need look no further than this. I mean take a look at the ad for the game that appeared in C&VG: 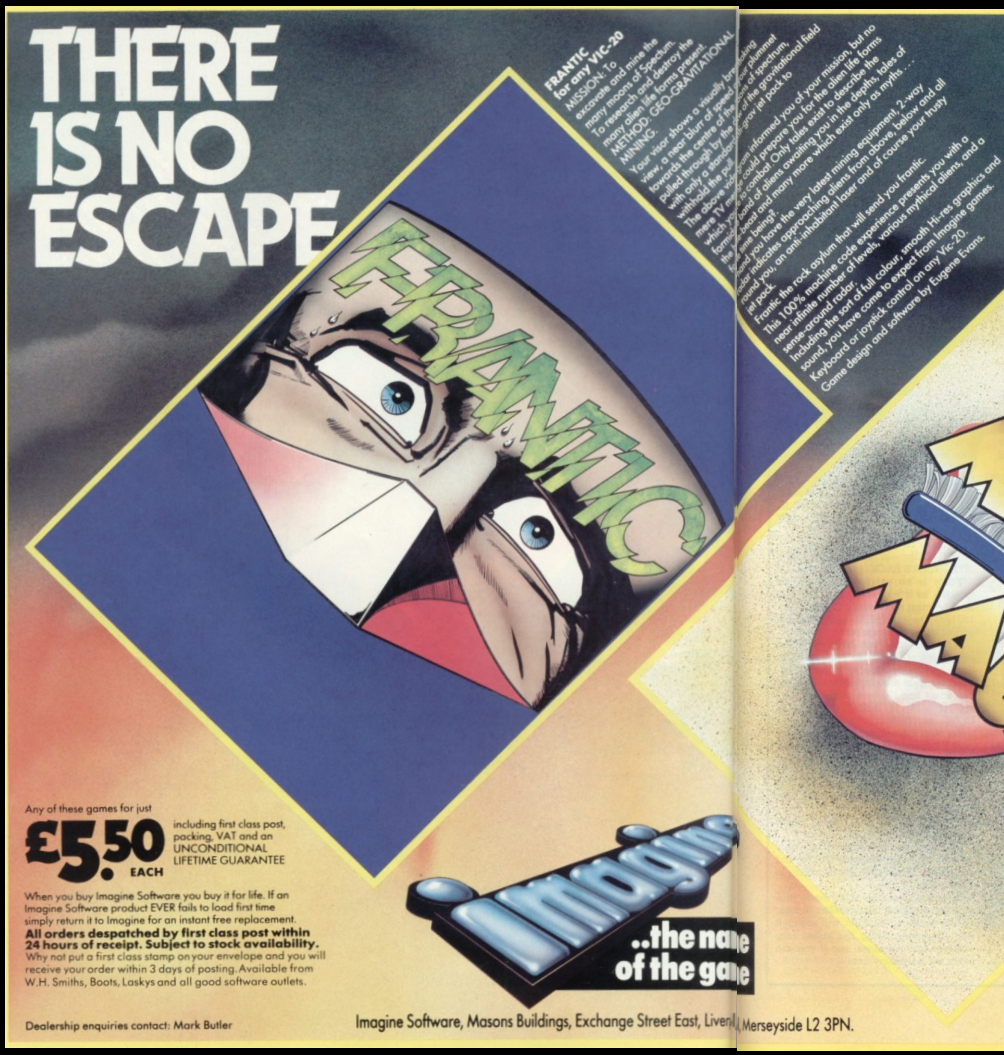 That’s pretty snazzy artwork for the time right there, and just look at the blurb off to the side. It actually promises a “visually breathtaking view” as you “plummet towards the centre of Spectrum” (ah, that’s why you can’t fucking go up in the game then), waffles on about mythical aliens and goes on about how you will see “the sort of full-colour, hi-rez graphics and sound you have come to expect from Imagine”.

What you actually get is THIS.

Your “breathtaking view” is a scrolling field of red minus signs with occasional white glitches running through them. The fugly, chunky enemies flicker egregiously and are hard to see due to their habit of putting enormous vomit-coloured squares on the screen. The controls are awful, the sound a massed Hoovers chorus, and it’s genuinely difficult to determine if you’ve actually scored any points. Death comes unexpectedly, inexplicably, and above all mercifully.

See that’s why I bloody hate marketing types. The only sensible marketing decision that should have been made regarding this game was “jesus fuck, hell no, get it away from me”, but somebody, knowing full well how dreadful it was, instead deliberately put together all that burbling tosh deliberately to con kids out of their pocket money to line their own pockets. Bruce fucking Everiss went on fucking holidays on the back of that behaviour. It makes me utterly sick to my stomach. No wonder Imagine crashed and burned, fuck’s sake.

Next we have “Ludwig’s Lemon Lasers”.

This is a game which is the videogame equivalent of having a really boring job on a production line, the sort of thing that people used to have to do for 8 hours a day on minimum wage back in the bad old days, but which is now done using digital vision systems and cleverly timed blasts of compressed air just like you see on “How It’s Made”. You have to keep some lemons away from some other lemons for a reason that is never so much as even hinted at, never mind actually explained. The game’s sole gimmick is that it constantly plays a bit of “Fur Elise” over and over and over again, justifying both the inclusion of “Ludwig” in the title and the psychotic homicidal rage you’d be worked up to by the time you’d heard it constantly while playing this game for 8 hours a day on minimum wage.

A game that makes you thankful for the advent of machine vision systems and industrial robotics.

Next is a brief look at Solar Software’s “Cavern Raider”.

This is a piss-poor attempt at cloning the much more polished “Caverns of Mars” from the 8-bit Atari. It has all the grace of those racing games that everyone used to do on the ZX81 because they were dead easy to do in BASIC by just scrolling the screen using PRINT statements. It’s only a brief look because I was feeling increasing levels of drowsiness during the first two sectors and then simple irritation at the third which led me to the conclusion that I simply could not be arsed.

To follow that and cleanse the palette here’s an even worse version of the same game by masters of shit on the Vic 20 “Nufekop”.

It’s simply unbelievably bad. For some reason you can’t fire at all and the only way to get the fuel you need to progress is to kind of try to smear it off the platforms as you clunk by. If you die by colliding with a wall it says YOU DIED 75 MILES DOWN or somesuch, but if you miraculously manage to evade the walls long enough (not always a simple task mainly because when you move your ship it often completely disappears, making it hard to see where you are) it says YOU DIED 65 METRES DOWN. I have no idea why you should be measured in imperial if you die by collision and in metric if you run out of fuel, or why there’s such a huge discrepancy in the distances reported. However far down though death comes as a merciful release from a horrible, dreadful game.

It’s a tossup really as to who was worse on the Vic, Nufekop or Interceptor Micro’s. Certainly both were capable of inflicting some eyewateringly bad games on people and somehow actually having the barefaced cheek to make money out of it. The guy from Nufekop has apparently written a book about it. I almost want to read it just to see how he justifies inflicting such wilfully vile crap on people back then.

Here’s another gem from Nufekop in which they actually demonstrate a marginally greater degree of competence than Interceptor in the ripping off Donkey Kong department:

Not by much, I am sure you’ll agree, but at least it is possible to go more than a few steps without turning into a green thing or having your head come off. They get round the tricky problem of implementing ladders by simply not having any at all and settle for a kind of staircase thing that wraps awkwardly at the screen edges. Inexplicably there appear to be indicators for three lives at the top of the screen but you never actually get them; the game ends at your first demise regardless. And then expects you to wait while it plays its crappy jingle before deigning to allow you to restart, although God only knows why you would want to unless you’re some kind of masochistic videogame pervert.

Finally let’s have a little look at “Cyclons” by Rabbit Software.

For all it’s not got the most spectacular graphics in the world I actually like this game. Motion is smooth and fluid, very unusually for a Vic-20 game, and it’s a challenging little inertia-filled shooter that’s actually quite fun to play. I always quite liked Rabbit for their anthropomorphic bunny logo and some of their games were utter tosh it’s true, but some of them were actually not terribly awful.

And so on that not terribly awful note it’s time to wrap up this week’s look into the world of ancient software of questionable quality. More in due course!

Oh and lest you go away feeling bad about seeing poor old Caverns of Mars so hideously butchered not once but twice I’ll just remind you of this.

This entry was posted in Historical. Bookmark the permalink.