The whole ‘re-emergence of VR’ thing was happening around the time that we were making TxK for the Vita, and once we were done with that we heard that Sony were looking to make their own VR system we expressed an interest in that. We were offered the chance to get ahold of some early prototypes of the PSVR (and boy has it ever come on since those early protos I can tell you!) so we jumped at the chance.

We spent about a month getting some stuff up and running on there. I made a simple little VR game inspired by my iOS game ‘Minotaur Rescue’. It was a simple game played in a sphere; your little ship was entirely controlled by where you were looking, it didn’t need you to use a controller at all. The gameplay was quite simple, shoot rocks and enemies and rescue the little minotaurs that were floating around in the play area. 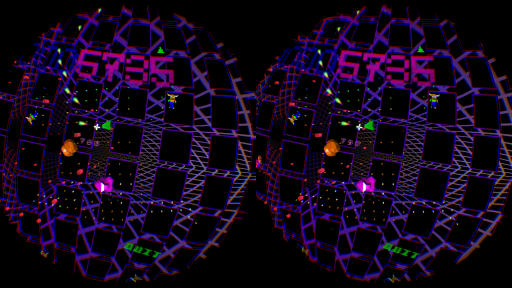 We ended up porting this to Oculus and Gear VR. We showed it at a couple of exhibitions and put a demo version up in the Gear VR app store but it was never widely distributed at all; we didn’t expect to make any money with it really, it was more of a learning exercise for us to dip a toe into VR.

Following that we did a complete overhaul and upgrade of TxK onto the PS4 and introducing support for PSVR. This was then ported to the PC and Oculus and again we took it around to a couple of exhibitions where we found that people really liked it, that although as a game it didn’t *need* VR in order to work, it actually felt pretty great to be surrounded by everything as you played through the game, particularly when you finished a level and it smashed all around you as you flew off the level. It imparted a Tron-like feeling of being *inside* an 80s arcade game, something I loved and which was absolutely on my mind when it came time to make Polybius.

Of course those versions of TxK have never been released, for reasons I don’t need to belabour here. However it is not out of the question that there may yet be some way for that work to see the light of day again. We’ll see.

By the time that was done, PSVR was getting a lot closer to its eventual release spec and we had a much better idea of what we might be able to get out of it. We went to Sony with little more than a video of an environment test we’d done (on Oculus at that point), my folder full of “influences” pics, and me basically saying “we’ll make something really cool in VR!”. We got the go-ahead from them and when I was thinking of what we’d call the game I remembered the old legend of Polybius and I thought it’d be neat to do something inspired by all that, but using modern VR techniques to make it super immersive and awesome. I’d noted people becoming positively euphoric while playing the VR versions of TxK, and I thought that if we could make a game that engendered feelings like that in its users, that would kind of fit in with the legendary Polybius’ reputation for being psychoactive (albeit in a harmless, positive way, unlike the brainwashing, disturbing way that the legendary Polybius was said to work).

We knew that to do a complete new game we’d need to get an implementation of our Neon lightsynth engine working on PS4, so we started out from that. The game was to be made so that it’d be playable in normal 2D as well as VR mode, but I absolutely wanted it to be primarily an excellent VR experience, so I wanted to do as much of the actual development of the environments and effects as I could directly in the VR space. To that end we needed to extend the Neon engine to be able to do stereo 3D, and I began to build an editor that functioned inside of VR, allowing you to adjust and animate the parameters that generated the environments and see the results floating all around you as you worked. 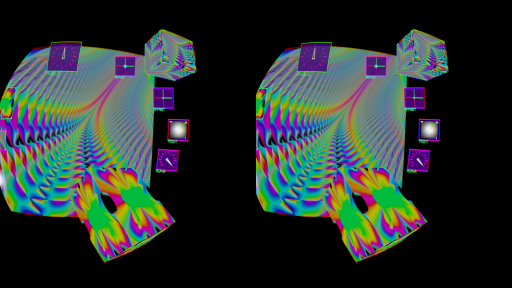 An early test of the VR Neon editor

This editor ended up being quite a complex and versatile beast, and while it ended up being just what we needed to make the environments for Polybius it did take up a few months of development time. Probably more than I’d anticipated. Giles would come up with some interesting Neon modules, and I’d play around with them, but as time went on I became increasingly anxious about the fact that we had a decent editor coming along but I didn’t have any actual gameplay to speak of running yet!

This came to a head one time when Giles went off back to Italy for a few days and it was getting close to the time when we were due to have a meeting with Sony to show them our progress – and I still didn’t have any game! So I thought “right! let’s get something down!” and just started throwing down some of the ideas I had on the simplest surface I had, a plane that I’d been using as a scroll test. 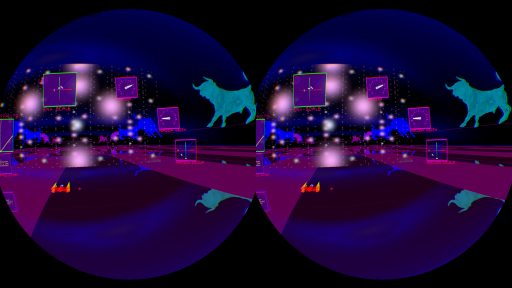 Scroll test plane and bulls in the editor

I made a little ship in a Neon stack and hooked it up to the controller. I gave it a gun and some shots, and made a level sequencer that just spat out little white placeholder cubes for enemies. I made it so you could shoot them and they’d blow up. I put in some shootable terrain blocks, and then I played around with that. It felt good, so I put on some Underworld and made gates that boosted you when you flew through them.

Suddenly that felt *excellent*. Flying through those gates, building up to crazy speed, and shooting these little white blocks that exploded all around you – I remember having a massive grin and realising that I’d finally found the direction I wanted to go with the gameplay.

Giles came back and I excitedly handed him the headset and told him to have a go and he had pretty much the exact same reaction that I did. We knew we had the start of something nice. It was a massive relief to me because I’d been waiting for that moment to come for a while. Sometimes it feels like it’ll never come, but it always does in the end.

We went to our meeting with Sony (and I remember that being initially a bit fraught, as it turned out we’d been building to some odd, obscure version of the OS that nobody had on a devkit there any more, and quite some faffing needed done before we could even get our demo running). It was still pretty much a bare bones concept, having only taken any definite shape a couple of weeks before, and I wasn’t sure what the guys would make of it. We gave the headset to our chief dude, and people gathered round to watch on the social screen while he played. Now as I am sure you know if you’ve played it in VR, it doesn’t really convey the same feeling watching it from outside in 2D as it does when you’re right there inside it, and the people watching outside thought it looked just OK.

Then our guy came out of the headset grinning and told us that after 2 minutes playing he’s “felt like a Jedi”. This was what we’d been hoping to hear

. Everyone else had a go and people definitely loved it once they got inside and had a go.

We got our go-ahead for the next stage of development, and retired happy to the Pelton Arms in Greenwich (our favourite London pub where we always stay when we’re in town for meetings; they have great beer and excellent music and a famous cat and a great breakfast in the morning, we’ve been there so many times now we’re treated like locals, and they even have a credit in Polybius, check the credits page).

There I drank a not inconsiderable amount of relief beer at having made it to the next stage. Now we just had to make the other 95% of the game!